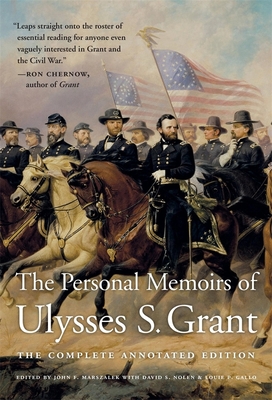 "Leaps straight onto the roster of essential reading for anyone even vaguely interested in Grant and the Civil War."
--Ron Chernow, author of Grant

"Provides leadership lessons that can be obtained nowhere else... Ulysses Grant in his Memoirs gives us a unique glimpse of someone who found that the habit of reflection could serve as a force multiplier for leadership."
--Thomas E. Ricks, Foreign Policy Ulysses S. Grant's memoirs, sold door-to-door by former Union soldiers, were once as ubiquitous in American households as the Bible. Mark Twain and Henry James hailed them as great literature, and countless presidents credit Grant with influencing their own writing. This is the first comprehensively annotated edition of Grant's memoirs, clarifying the great military leader's thoughts on his life and times through the end of the Civil War and offering his invaluable perspective on battlefield decision making. With annotations compiled by the editors of the Ulysses S. Grant Association's Presidential Library, this definitive edition enriches our understanding of the pre-war years, the war with Mexico, and the Civil War. Grant provides essential insight into how rigorously these events tested America's democratic institutions and the cohesion of its social order. "What gives this peculiarly reticent book its power? Above all, authenticity... Grant's style is strikingly modern in its economy."
--T. J. Stiles, New York Times "It's been said that if you're going to pick up one memoir of the Civil War, Grant's is the one to read. Similarly, if you're going to purchase one of the several annotated editions of his memoirs, this is the collection to own, read, and reread."
--Library Journal