The People vs. Democracy: Why Our Freedom Is in Danger and How to Save It (Paperback) 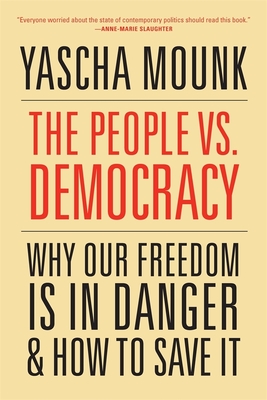 The People vs. Democracy: Why Our Freedom Is in Danger and How to Save It (Paperback)

"Everyone worried about the state of contemporary politics should read this book."
--Anne-Marie Slaughter "A trenchant survey from 1989, with its democratic euphoria, to the current map of autocratic striving."
--David Remnick, New Yorker The world is in turmoil. From Russia and Turkey across Europe to the United States, authoritarian populists have seized power as two core components of liberal democracy--individual rights and the popular will--are increasingly at war. As the role of money in politics has soared, a system of "rights without democracy" has taken hold. Populists who rail against this say they want to return power to the people. But in practice they create something just as bad: a system of "democracy without rights." Yascha Mounk offers a clear and trenchant analysis of what ails our democracy and what it will take to get it back on track. "Democracy is going through its worst crisis since the 1930s... But what exactly is the nature of this crisis? And what is driving it? The People vs. Democracy stands out in a crowded field for the quality of its answers to these questions."
--The Economist "Brilliant... As this superb book makes clear, we need both the liberal framework and the democracy, and bringing them back together is the greatest challenge of our time."
--Los Angeles Times "Extraordinary...provides a clear, concise, persuasive, and insightful account of the conditions that made liberal democracy work--and how the breakdown in those conditions is the source of the current crisis of democracy around the world."
--The Guardian