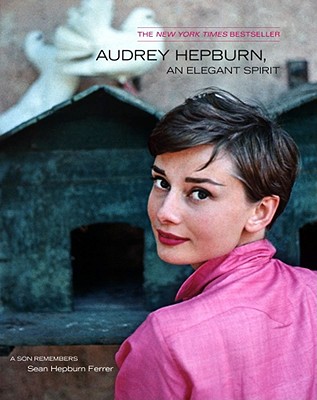 
Backordered
Now in paperback, an intimate look at the woman the world adored, by the son who adored her with unique photos, drawings, and other rare Audrey memorabilia.

She dazzled millions as Gigi. Eliza Doolittle. Holly Golightly. But to her most adoring fan, Audrey Hepburn was best known for her role as “Mummy.”

In this heartfelt tribute to his mother, Sean Hepburn Ferrer offers a rare and intimate glimpse into the life of one of Hollywood's brightest stars. Audrey Hepburn, An Elegant Spirit is a stunning compilation of nearly 300 photographs, many straight from the family album and never before published; archival documents, personal correspondence, and mementos; even paintings and illustrations from the actress herself.

Sean tells Audrey Hepburn's remarkable story, from her childhood in war-torn Holland to the height of her fame to her autumn years far from the camera and the crush of the paparazzi. Sean introduces us to someone whose grace, charm, and beauty were matched only by her insecurity about her appearance and talent, and who used her hard-won recognition as a means to help children less fortunate than her own. With this unique biography, Sean celebrates his mother's history and humanity—and continues her charitable work by donating proceeds from this book to the Audrey Hepburn Children's Fund.
Sean Hepburn Ferrer was born in films. His mother is Audrey Hepburn, his father Mel Ferrer. He has worked in all aspects of motion picture development, production, post-production, and marketing. Sean founded the Audrey Hepburn Children’s Fund to continue his mother’s legacy of helping children in need all over the world. Educated in Europe and fluent in French, Italian, Spanish, English, and Portuguese, he lives in Santa Monica and Tuscany with his wife and his two children.