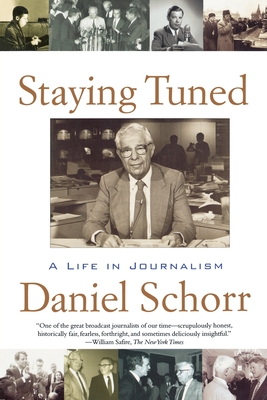 
Not On Our Shelves—Ships in 1-5 Days
He has covered and analyzed nearly every major event of our time: the founding of NATO, the building of the Berlin Wall, the 1950s McCarthy hearings, and the 1990s Clinton impeachment hearings. As both a national and international eyewitness, Daniel Schorr has spent six decades fully engaged in world-watching.
After opening the CBS bureau in Moscow in 1955 and arranging an unprecedented television interview with Soviet boss Nikita Khrushchev, Daniel Schorr went on to a career often revered and sometimes reviled. His no-holds-barred approach to reporting won him three Emmys for his coverage of Watergate, and landed him on Nixon's "enemies list." In the 1970s, his refusal to name sources regarding CIA and FBI misdeeds led to his being threatened with jail for contempt by the House Ethics Committee. Always probing, Daniel Schorr continues in his quest for the truth as the senior news analyst for National Public Radio®.
This amazing autobiography not only details the life and times of the octogenarian newsman -- the last of the legendary Edward R. Murrow news team still active in journalism -- but also poses some important questions about the future of media.
Daniel Schorr has covered the news for more than six decades. In addition to winning three Emmys®, he has received the Alfred I. DuPont-Columbia University Golden Baton for Exceptional Contribution to Radio and Television Reporting and Commentary, a Peabody personal award for "a lifetime of uncompromising reporting of the highest integrity," and the George Polk Radio commentary award. He has been inducted into the Society of Professional Journalists Hall of Fame. Schorr reported alongside Edward R. Murrow and Walter Cronkite for CBS, started CNN with Ted Turner, and is now senior news analyst for National Public Radio®.