In The Presence Of Cheng Man-Ch'ing: My Life And Lessons With The Master Of Five Excellences (Hardcover) 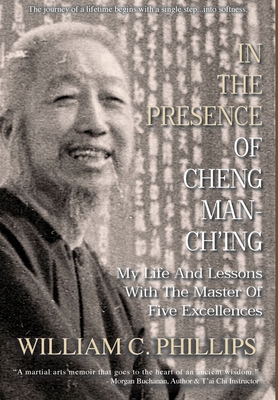 In The Presence Of Cheng Man-Ch'ing: My Life And Lessons With The Master Of Five Excellences (Hardcover)

Sifu William C. Phillips, a devoted student and master teacher of tai chi with over fifty years experience, takes us on a journey into his lifetime in the martial arts and in particular, his lessons and experiences with the Master Of Five Excellences, the incomparable Cheng Man-Ch'ing, the expert who brought tai chi to the West in the 1960s.

SIFU WILLIAM C. PHILLIPS, commenced training in tai chi in 1967 and was a student of Professor Cheng Man Ch'ing, one of the great masters of the 20th century, from 1970-1975. He was the most junior student to become a teacher in his school of tai chi, culture and the arts. He also studied Yang family tai chi and push hands with Zhang Lu-Ping.

In addtion to writing many magazine articles and producing instructional videos, Phillips has given countless demonstrations, including at Madison Square Garden and appeared in magazines and newspapers such as Self, Men's Health, The Harvard Women's Health Watch and USA Today. He has also appeared on several cable TV shows.