Jimi: Sounds Like a Rainbow: A Story of the Young Jimi Hendrix (Hardcover) 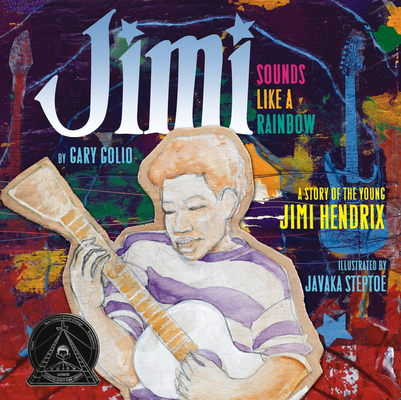 Jimi: Sounds Like a Rainbow: A Story of the Young Jimi Hendrix (Hardcover)

Jimi Hendrix was many things: a superstar, a rebel, a hero, an innovator. But first, he was a boy named Jimmy who loved to draw and paint and listen to records. A boy who played air guitar with a broomstick and longed for a real guitar of his own. A boy who asked himself a question: Could someone paint pictures with sound?
This a story of a talented child who learns to see, hear, and interpret the world around him in his own unique way. It is also a story of a determined kid with a vision, who worked hard to become a devoted and masterful artist. Jimi Hendrix--a groundbreaking performer whose music shook the very foundations of rock 'n' roll.

Gary Golio is the New York Times bestselling author of Jimi: Sounds Like a Rainbow, A Story of the Young Jimi Hendrix. He has also counseled children and teens in the area of addiction. Gary lives with his wife, the author Susanna Reich, in Ossining, New York. To learn more, please visit www.garygolio.com.

Javaka Steptoe is a Caldecott Medalist, Coretta Scott King Award winner, and New York Times best-selling picture book creator. He has illustrated several books for children, including Jimi: Sounds Like a Rainbow, A Story of the Young Jimi Hendrix by Gary Golio, A Pocketful of Poems by Nikki Grimes, and Radiant Child, which he also wrote. He lives in Brooklyn, New York. Visit him online at javaka.com and on Twitter @javaka_steptoe.

Coretta Scott King Honor for Illustrator "This book is likely to fascinate older children and reluctant readers who might be familiar with Hendrix’s music, and could easily be tied into art and music curricula."—School Library Journal, starred review "The author—an artist and clinical social worker—lucidly demonstrates that a path to creative excellence is not only possible for young people but self-actualizing."—Kirkus, starred review "Valuable lessons underlie newcomer Golio's account of Hendrix's life: important work can be done by young people; artistry develops slowly, through careful work; and surroundings that appear hostile to creativity can just as well nurture it."—Publishers Weekly —