Bodies from the Ice: Melting Glaciers and the Recovery of the Past (Hardcover) 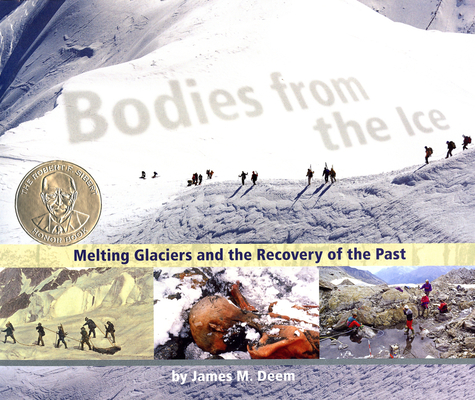 Bodies from the Ice: Melting Glaciers and the Recovery of the Past (Hardcover)

In 1991, mountain climbers on the Niederjoch Glacier on the Italian-Austrian border came across something unexpected: a body. It had been a very warm summer, and five bodies had already turned up in the area. But something here was different. The materials found with the body suggested it might be very old, perhaps from the 1800s. But radiocarbon dating proved the iceman was 5,300 years older, from the Copper Age. He was named Ötzi and he is the oldest human mummy preserved in ice ever found. In this Sibert Honor Book, James M. Deem takes us on a captivating and creepy journey to learn about glaciers, hulking masses of moving ice that are now offering up many secrets of the past.
James M. Deem is the author of numerous books for young readers, including 3 NB of Julian Drew, Bodies from the Ice: Melting Glaciers and the Rediscovery of the Past, and Faces From the Past. Mr. Deem lives outside of Phoenix, Arizona.

"An intriguing read, complementing the author's highly commended Bodies from the Bog (1998) and Bodies from the Ash (2005), with a bonus environmental message."--Kirkus Reviews, starred review "There are books about melting glaciers and books about frozen bodies, but this attractive offering combines the topics in a way that will intrigue readers . . . Heavily illustrated with historical memorabilia as well as photos of bodies, scenery, artifacts, and rather simplistic maps, this offers a lot to look at and learn about."--Booklist "With its extensive bibliography, suggested Web sites, and a listing of glaciers to visit, Bodies is a fantastic resource. Deem superbly weaves diverse geographical settings, time periods, and climate issues into a readable work that reveals the increasing interdisciplinary dimensions of the sciences."--School Library Journal, starred review "Glaciers—and the preserved past they offer up—give us an intriguing peek into various cultures, yielding information on everything from human sacrifice to occult superstition to sporting endeavors. As the book concludes, a striking irony becomes evident: glaciers continue to melt at an alarming rate, warranting caution and concern for the global environment, yet even as they dwindle they offer up more clues to our human past. The book design, with its variety of photographs, captions, and sidebars, seals the appeal."--Horn Book —