Bury The Chains: Prophets and Rebels in the Fight to Free an Empire's Slaves (Paperback) 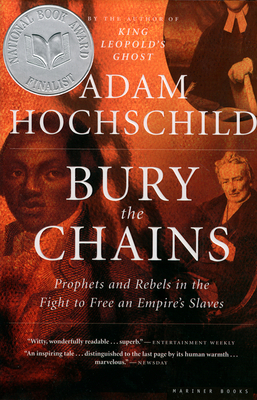 Bury The Chains: Prophets and Rebels in the Fight to Free an Empire's Slaves (Paperback)


Not On Our Shelves—Ships in 1-5 Days
Adam Hochschild's Bury the Chains is the taut, gripping account of one of the most brilliantly organized social justice campaigns in history—the fight to free the slaves of the British Empire.

In early 1787, twelve men—a printer, a lawyer, a clergyman, and others united by their hatred of slavery—came together in a London printing shop and began the world's first grassroots movement, battling for the rights of people on another continent. Masterfully stoking public opinion, the movement's leaders pioneered a variety of techniques that have been adopted by citizens' movements ever since, from consumer boycotts to wall posters and lapel buttons to celebrity endorsements. A deft chronicle of this groundbreaking antislavery crusade and its powerful enemies, Bury the Chains gives a little-celebrated human rights watershed its due at last.

“Bury the Chains is by far the most readable and rounded account we have of British antislavery, a campaign that...helped to change the world and can be seen as a prototype of the modern social justice movement”—Los Angeles Times Book Review

“Bury the Chains is a thrilling, substantive, and oftentimes raw work of narrative history.” —Maureen Corrigan, NPR's “Fresh Air”   “Hochschild has crafted a powerfully inspiring tale . . . A chronicle of a rare and radiant victory.” —Kirkus Reviews, starred review   “A brilliantly told tale, at once horrifying and pleasurable to read.” —Publishers Weekly, starred review   “Bury the Chains is a vital testament to difficult hope.” —Minneapolis Star-Tribune   “A superb account . . . a witty, wonderfully readable narrative. Grade: A.” —Entertainment Weekly   “A moral text with the dramatic power of a great epic novel.” —St. Louis Post-Dispatch   “There are few books that that could serve as a required and much-loved text for a high school history class and also a compelling Sunday afternoon read for anyone. This is one of those books.” —Chicago Sun-Times   “Bury the Chains is by far the most readable and rounded account we have of British anti-slavery.”  —Los Angeles Times   “One quickly runs out of superlatives when praising this book.”  —Christian Science Monitor   “Terrifically readable . . . inspiring.”  —San Jose Mercury News   “Hochschild has a knack for vivid portraits, and an eye for arresting detail.”  —Boston Globe     —