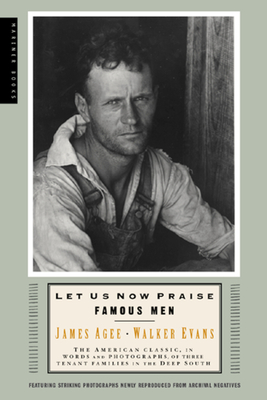 In the summer of 1936, James Agee and Walker Evans set out on assignment for Fortune magazine to explore the daily lives of sharecroppers in the South. Their journey would prove an extraordinary collaboration and a watershed literary event when, in 1941, Let Us Now Praise Famous Men was first published to enormous critical acclaim.

This unsparing record of place, of the people who shaped the land and the rhythm of their lives, is intensely moving and unrelentingly honest, and today — recognized by the New York Public Library as one of the most influential books of the twentieth century — it stands as a poetic tract of its time. With an elegant design as well as a sixty-four-page photographic prologue featuring archival reproductions of Evans's classic images, this historic edition offers readers a window into a remarkable slice of American history.
WALKER EVANS (1903-1975) is best known for his striking Depression-era photographs. He served as an editor for both Fortune and Time and was a professor of graphic arts at Yale. His other books include American Photographs and Message from the Interior.

JAMES AGEE (1909-1955) was a poet, screenwriter, and journalist who won the Pulitzer Prize for his novel A Death in the Family. His screenplay work included The African Queen and The Night of the Hunter.

"Renowned for its fusion of social conscience and artistic radicality and for the way Evans's spare, tautly composed images and Agee's more extravagant prose complement and enhance each other." --New York Times The New York Times

The "most realistic and most important moral effort of our American generation." - Lionel Trilling —