Operators and Things: The Inner Life of a Schizophrenic (Paperback) 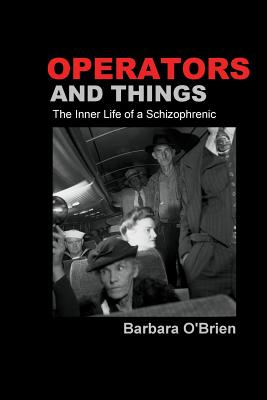 Operators and Things: The Inner Life of a Schizophrenic (Paperback)

Reissue of the 1958 classic true story of a woman's descent into schizophrenia and her journey back to sanity.

"O'Brien has produced a work of brilliance and power, evoking a combination of Kafka and Joyce, with a touch of Orwell." Robert R. Kirsch, Los Angeles Times

"An absorbing account of life in the dream world of a schizophrenic." Publishers Weekly

"For six months she travels around the country on Greyhound buses, captive of the Operators, who push and pull, torment, confuse, and exhaust her. And at the end of her time of madness, she understands precisely what has been happening. Her insight is penetrating and irresistible. Her writing is delectable. She displays gut-wrenching humor and pungent metaphor with an eloquent, eminently readable style. This book is enthusiastically recommended." Coevolution Quarterly

"...the author is contributing irreplaceably to our knowledge." Archives of General Psychiatry

"A beautifully lucid autobiographical description of a psychotic episode that lasted six months whose healing motion is clear." R.D. Laing, The Politics of Experience

"With penetration and satisfying imagery, Miss O'Brien (a pseudonym) describes her psychosis, from which unaccountably and spontaneously she recovers." William F. Buckley, National Review

Barbara O'Brien is a pseudonym for a woman who experienced a six-month psychotic break during the 1950s and wrote about it in Operators and Things, originally published in 1958. She was last heard from in 1976, when she wrote a new chapter entitled "The New Minority" for a paperback edition of the book. At the time, her author's biography read: "Barbara O'Brien is now fully recovered and lives outside Los Angeles, California." Michael Maccoby, Ph.D., is a psychoanalyst and anthropologist globally recognized as an expert on leadership for his research, writing, and projects to improve organizations and work. He has authored or co-authored twelve books and consulted to companies, governments, the World Bank, unions, research and development centers and laboratories, universities, and orphanages in twenty-six countries. He lives in Washington, DC. COLLEEN DELEGAN's first life was an advertising creative director. Her second life is a screenwriter, novelist, and television writer. She is hoping for a third and final life as a wealthy nomad. She currently lives in Chicago. MELANIE VILLINES is a critically acclaimed novelist, playwright, screenwriter, television writer, and biographer. Born and raised in Chicago, she lives in Los Angeles.