How the Scots Invented the Modern World: The True Story of How Western Europe's Poorest Nation Created Our World and Everything in It (Paperback) 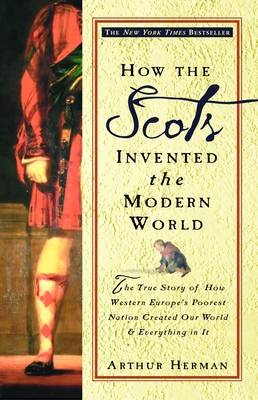 How the Scots Invented the Modern World: The True Story of How Western Europe's Poorest Nation Created Our World and Everything in It (Paperback)


On Our Shelves Now at:
An exciting account of the origins of the modern world

Who formed the first literate society? Who invented our modern ideas of democracy and free market capitalism? The Scots. As historian and author Arthur Herman reveals, in the eighteenth and nineteenth centuries Scotland made crucial contributions to science, philosophy, literature, education, medicine, commerce, and politics—contributions that have formed and nurtured the modern West ever since.

Herman has charted a fascinating journey across the centuries of Scottish history. Here is the untold story of how John Knox and the Church of Scotland laid the foundation for our modern idea of democracy; how the Scottish Enlightenment helped to inspire both the American Revolution and the U.S. Constitution; and how thousands of Scottish immigrants left their homes to create the American frontier, the Australian outback, and the British Empire in India and Hong Kong.

How the Scots Invented the Modern World reveals how Scottish genius for creating the basic ideas and institutions of modern life stamped the lives of a series of remarkable historical figures, from James Watt and Adam Smith to Andrew Carnegie and Arthur Conan Doyle, and how Scottish heroes continue to inspire our contemporary culture, from William “Braveheart” Wallace to James Bond.

And no one who takes this incredible historical trek will ever view the Scots—or the modern West—in the same way again.
Arthur Herman is the bestselling author of The Cave and the Light, Freedom’s Forge, How the Scots Invented the Modern World, The Idea of Decline in Western History, To Rule the Waves, and Gandhi & Churchill, which was a 2009 finalist for the Pulitzer Prize. Dr. Herman taught the Western Heritage Program at the Smithsonian’s Campus on the Mall, and he has been a professor of history at Georgetown University, The Catholic University of America, George Mason University, and The University of the South at Sewanee.
“Finally we have a book that explains how the . . . Scots created the modern civilized values America and the Western world still uphold. This is a great book, one which is now even more relevant than ever.”—Michael Barone, U.S. News & World Report, coauthor of The Almanac of American Politics

“Arthur Herman provides a convincing and compelling argument. . . . He is a natural writer, weaving philosophical concerns seamlessly through a historical narrative that romps along at a cracking pace.”—Irvine Welsh, The Guardian

“Herman’s book tells an exciting story with gusto . . . its range and narrative verve make it an entertaining and illuminating read.”—Sunday Times (London)