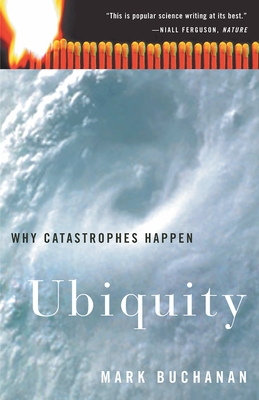 
Backordered
Critically acclaimed science journalist, Mark Buchanan tells the fascinating story of the discovery that there is a natural structure of instability woven into the fabric of our world, which explains why catastrophes-- both natural and human-- happen.

Scientists have recently discovered a new law of nature and its footprints are virtually everywhere-- in the spread of forest fires, mass extinctions, traffic jams, earthquakes, stock-market fluctuations, the rise and fall of nations, and even trends in fashion, music and art. Wherever we look, the world is modelled on a simple template: like a steep pile of sand, it is poised on the brink of instability, with avalanches-- in events, ideas or whatever-- following a universal pattern of change. This remarkable discovery heralds what Mark Buchanan calls the new science of 'ubiquity', a science whose secret lies in the stuff of the everyday world. Combining literary flair with scientific rigour, this enthralling book documents the coming revolution by telling the story of the researchers' exploration of the law, their ingenious work and unexpected insights.

Buchanan reveals that we are witnessing the emergence of an extraordinarily powerful new field of science that will help us comprehend the bewildering and unruly rhythms that dominate our lives and may even lead to a true science of the dynamics of human culture and history.
MARK BUCHANAN is a science writer who has worked on the editorial staff of Nature and as a features editor for New Scientist. He earned a Ph.D. in theoretical physics from the University of Virginia. He is also the author of Nexus, The Social Atom and Forecast.
“Buchanan succeeds where others fail. . . . [He] is able to communicate this novel way of thinking without compromising scientific integrity.”—New Scientist

“I grabbed this book and turned the pages. Does Buchanan get it right? Does he really understand how this might change the way we look at the world? He does. This is the book I wish I had written.”
—Per Bak, author of How Nature Works

“Ubiquity explains better than any previous book why many fields of the natural world and human life are unpredictable.”
—Financial Times (London)

“There are many subtleties and twists in the story to which we shall come later in this book, but the basic message, roughly speaking, is simple: The peculiar and exceptionally unstable organization of the critical state does indeed seem to be ubiquitous in our world. Researchers in the past few years have found its mathematical fingerprints in the workings of all the upheavals I’ve mentioned so far, as well as in the spreading of epidemics, the flaring of traffic jams, the patterns by which instructions trickle down from managers to workers in an office, and in many other things. At the heart of our story, then, lies the discovery that networks of things of all kinds—atoms, molecules, species, people, and even ideas—have a marked tendency to organize themselves along similar lines. On the basis of this insight, scientists are finally beginning to fathom what lies behind tumultuous events of all sorts, and to see patterns at work where they have never seen them before.”
—from the Introduction