Facing the Congo: A Modern-Day Journey into the Heart of Darkness (Paperback) 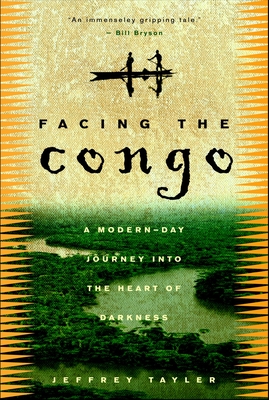 Facing the Congo: A Modern-Day Journey into the Heart of Darkness (Paperback)


Special Order—Subject to Availability
Faced with an identity crisis in his work and his life, seasoned traveler and journalist Jeffrey Tayler made a bold decision. He would leave behind his mundane existence in Moscow to re-create the legendary British explorer Henry Stanley’s trip down the Congo in a dugout canoe, stocked with food, medicine, and even a gun-toting guide. But once his tiny boat pushed off the banks of this mysterious river, Tayler realized he was in a place where maps and supplies would have no bearing on his survival. As Tayler navigates this immense waterway, he encounters a land of smothering heat and intense rains, wary villagers, corrupt officials and dead-eyed soldiers demanding bribes, jungle animals, mosquitoes, and, surprisingly, breathtaking natural beauty.

Filled with honesty and rich description, Facing the Congo is a sophisticated depiction of today’s Democratic Republic of the Congo, a country brought to its knees by a succession of despotic leaders. But most mportant, Tayler’s stunning narrative is a deeply satisfying personal journey of fear and awakening, with a message that will resonate with anyone who has ever felt compelled, whether in life or in fantasy, to truly explore and experience our world.
JEFFREY TAYLER is the author of Siberian Dawn: A Journey Across the New Russia. He writes for Condé Nast Traveler, Spin, Harper’s, and other publications and is a commentator on NPR’s All Things Considered. Two of his essays appear in the inaugural edition of The Best American Travel Writing. He lives in Russia.
“One of the best travel books of 2000.”
—The New York Times Book Review

“Facing the Congo does what a travel book is supposed to do. It presents a vividly described world that brings the reader as close to the Congo as words can do, inspiring the type of wanderlust that can only be sated by one’s picking a spot on a map and just going.”
—CNN.com

“Tayler goes off the beaten path to give us a much deeper version of the truth, and unlike so many other gonzo travel writers, he is not politically naïve.”
—Robert Kaplan, author of Balkan Ghosts