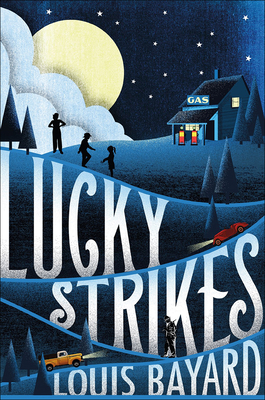 Set in Depression-era Virginia, Lucky Strikes by Louis Bayard is the story of orphaned Amelia and her struggle to keep her siblings together.

With her mama recently dead and her pa sight unseen since birth, fourteen-year-old Amelia is suddenly in charge of her younger brother and sister, and of the family gas station. Harley Blevins, local king and emperor of Standard Oil, is in hot pursuit to clinch his fuel monopoly. To keep him at bay and her family out of foster care, Melia must come up with a father, and fast. And so when a hobo rolls out of a passing truck, Melia grabs opportunity by its beard. Can she hold off the hounds till she comes of age?

"This is a darn good yarn with plenty of room for rooting and more than a few laughs." Booklist, starred review

Louis Bayard is a New York Times Notable author and has been nominated for both the Edgar(r) and Dagger awards for his adult historical thrillers, which include The Pale Blue Eye and Mr. Timothy. He teaches creative writing at George Washington University in Washington, D.C.