Isobel Adds It Up (Paperback) 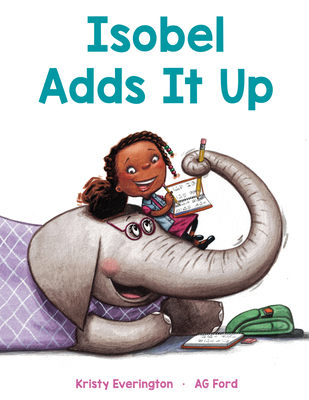 Isobel Adds It Up (Paperback)


On Our Shelves Now at:
The perfect book for math-loving kids is now in paperback! Isobel just wants to do her math homework in peace, but some noisy neighbors distract from schoolwork by making her wonder who could be making all that noise?

Isobel is a problem solver . . . addition, subtraction, multiplication, division! But trying to figure out who is causing all the noise next door is one problem she can't quite work out. Is it a marching band? A basketball team in the middle of a practice? Could it be a family of elephants?

Isobel doesn't know what to do about all the noise, but the solution just might come from the most unlikely place!

Kristy Everington is a graduate of Vermont College of Fine Arts with an MFA in Writing for Children and Young Adults. Originally from Perth, Australia, she now lives in the Bay Area with her husband and quite a lot of cats. Kristy enjoys exploring the California coastline and visiting as many lighthouses as she can.

AG FORD is a New York Times bestselling illustrator and recipient of two NAACP Image Awards. He grew up in Dallas, Texas. Ford attended the Columbus College of Art and Design, majoring in illustration. He has illustrated picture books by Kareem Abdul-Jabbar, Sharon Robinson, Ilyasah Shabazz, Martin Luther King III, Nick Cannon, Jonah Winter, the Archbishop Desmond Tutu, and many others. Mr. Ford has over 30 published books for children, including picture books, chapter books such as the Magic Tree House series, and YA covers.
agfordillustration.com
“An imaginative read-aloud recommended for teachers wanting to connect literacy and math and for public libraries looking to upgrade their collection of girl-empowering STEAM books.” –School Library Journal, starred review

"Sprawled across her bed, pencil poised, Isobel, a mathematically minded young Black girl, is eager to add, subtract, multiply, and divide her way to completing her homework assignment. In charming artwork, clouds of numbers, symbols, graphs, and equations billow from her busy brain and dance across the page in a swirl of arithematical bliss." --School Library Journal, starred review

"Not only is it refreshing to read a story about a little girl who loves math, but it is also exciting to read a book in which a child learns to establish boundaries in a way that is kind and fair. Ford illustrates Isobel’s reality in full color, with skewed angles to emphasize the disruption to her routines; both the equations she’s trying to work and her imagined scenes are represented as monochrome, white-space–filling cartoons. An adorable story about friendship and learning how to state your needs." --Kirkus Reviews