The Man Who Fell to Earth (Paperback) 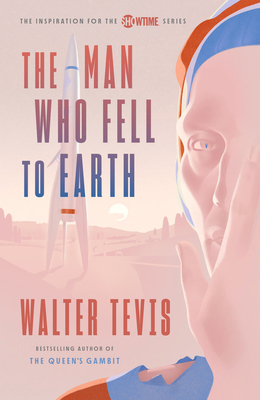 The Man Who Fell to Earth (Paperback)


On Our Shelves Now at:
From the bestselling author of The Queen's Gambit, the landmark science fiction novel that inspired the classic 1976 film starring David Bowie and is the basis for the Showtime series

A man wanders into town one day seemingly out of nowhere. He starts by peddling valuables just to get by. But he possesses uncanny scientific knowledge, which he uses to develop technologies of a marvelous nature. In time he builds a corporate empire that propels him to unimaginable wealth—but to what end? His rapid ascent to the highest levels of success is remarkable, but the vision of his enterprise begins to falter as he succumbs to afflictions that feel all-too-human, and the true purpose of his presence here on earth is in grave danger of being abandoned.
WALTER TEVIS is the author of The Hustler, The Man Who Fell to Earth, Mockingbird, The Steps of the Sun, The Queen’s Gambit, The Color of Money, and the short story collection Far from Home. The Man Who Fell to Earth was the basis for a major motion picture starring David Bowie. The Hustler and The Color of Money were also adapted for film, The Queen’s Gambit was the basis of the Emmy Award–winning Netflix series and The Man Who Fell to Earth is the basis of the Showtime series. Tevis died in 1984.
“Beautiful science fiction. . . . The story of an extraterrestrial visitor from another planet is designed mainly to say something about life on this one.” —The New York Times

“Those who know The Man Who Fell to Earth only from the film version are missing something. This is one of the finest science fiction novels of its period.” —J.R. Dunn, author of Full Tide of Night

“An utterly realistic novel about an alien human on Earth. . . . Realistic enough to become a metaphor for something inside us all, some existential loneliness.” —Norman Spinrad

“Tevis writes . . . with power and poetry and tension.” —The Washington Post Book World

“Terrific. . . . The Man Who Fell to Earth can be seen as the story of a very hip, space-age Passion—about a savior who comes to Earth not to save us but his own people and who is, in effect, crucified dead and buried.” —Vincent Canby