Flying Blind: The 737 MAX Tragedy and the Fall of Boeing (Large Print / Paperback) 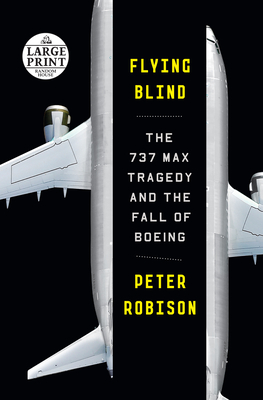 Flying Blind: The 737 MAX Tragedy and the Fall of Boeing (Large Print / Paperback)


Not On Our Shelves—Ships in 1-5 Days
NEW YORK TIMES BUSINESS BEST SELLER • A suspenseful behind-the-scenes look at the dysfunction that contributed to one of the worst tragedies in modern aviation: the 2018 and 2019 crashes of the Boeing 737 MAX.

An "authoritative, gripping and finely detailed narrative that charts the decline of one of the great American companies" (New York Times Book Review), from the award-winning reporter for Bloomberg.

Boeing is a century-old titan of industry. It played a major role in the early days of commercial flight, World War II bombing missions, and moon landings. The planemaker remains a cornerstone of the U.S. economy, as well as a linchpin in the awesome routine of modern air travel. But in 2018 and 2019, two crashes of the Boeing 737 MAX 8 killed 346 people. The crashes exposed a shocking pattern of malfeasance, leading to the biggest crisis in the company’s history—and one of the costliest corporate scandals ever.

How did things go so horribly wrong at Boeing?

Flying Blind is the definitive exposé of the disasters that transfixed the world. Drawing from exclusive interviews with current and former employees of Boeing and the FAA; industry executives and analysts; and family members of the victims, it reveals how a broken corporate culture paved the way for catastrophe. It shows how in the race to beat the competition and reward top executives, Boeing skimped on testing, pressured employees to meet unrealistic deadlines, and convinced regulators to put planes into service without properly equipping them or their pilots for flight. It examines how the company, once a treasured American innovator, became obsessed with the bottom line, putting shareholders over customers, employees, and communities.

By Bloomberg investigative journalist Peter Robison, who covered Boeing as a beat reporter during the company’s fateful merger with McDonnell Douglas in the late ‘90s, this is the story of a business gone wildly off course. At once riveting and disturbing, it shows how an iconic company fell prey to a win-at-all-costs mentality, threatening an industry and endangering countless lives.
PETER ROBISON is an investigative journalist for Bloomberg and Bloomberg Businessweek. He has reported from the U.S., Europe and Asia. He is a recipient of the Gerald Loeb Award, the Malcolm Forbes Award, and four "Best in Business" awards from the Society of American Business Editors and Writers. A native of St. Paul, Minnesota with an honors degree in history from Stanford University, he lives in Seattle, Washington.
NEW YORK TIMES BUSINESS BESTSELLER • WALL STREET JOURNAL BUSINESS BESTSELLER • NAMED A BEST BOOK OF THE YEAR BY NPR, NEWSWEEK, THE NEW YORK POST • A WALL STREET JOURNAL BEST BUSINESS BOOK OF THE YEAR • A NEW YORK TIMES EDITORS' CHOICE • WINNER OF THE SABEW BEST BUSINESS BOOK OF THE YEAR • LONGLISTED FOR THE FT BEST BUSINESS BOOK OF THE YEAR

"A compelling, deeply reported account, written in crisp, controlled anger. It is an indictment not just of one of America’s most celebrated companies, but of an entire era: of politicians believing business knew best, of regulators bending to their will, and of shareholder returns elevated above any consideration for the rest of society, including consumers’ safety—and lives."
—Financial Times

"Powerful and unsettling... A page-turner...One can only hope that the next generation of corporate executives will read Robison’s book."
—Washington Post

"A disturbing account that will return much-deserved scrutiny both to Boeing and to its regulator."
—Wall Street Journal

"The long train of events that led to the tragedies—and the subsequent reputational and financial trashing of one of America’s biggest companies—is expertly dissected in Flying Blind.... A 'bottom-line mindset' prevailed. In rich detail, Mr Robison chronicles the shortcomings of that approach at a firm where safety should be paramount."
—The Economist

“[Robison] avoids simple explanations or scapegoats. His story focuses on two major shifts: one is the evolution of Boeing over the course of the last half-century…. the second is a political and business climate that became increasingly hostile to assertive federal regulation. Robison convincingly depicts the story of the 737 MAX as the culmination of these trends, but he ultimately resists the sort of pat causal explanations that many—including the government itself—have used to try to describe what happened.”
—The New Republic

“Vividly written and meticulously researched, Flying Blind is a story everyone—every consumer, every citizen, every worker in every industry—needs to read. Peter Robison brilliantly places Boeing's deadly downfall within the larger tragedy of an American business culture that gradually has smashed every altar but the one where the bottom line is worshipped.”
—Diana B. Henriques, New York Times bestselling author of The Wizard of Lies and A First-Class Catastrophe

“Flying Blind is superb reporting in service of a riveting story. Robison has crafted this tour de force masterfully, showing how modern capitalism’s abandonment of quality in favor of quick bucks literally knocked airplanes out of the sky. As you turn each page in growing disbelief and anger, I guarantee it will keep you reading late into the night.”
—Kurt Eichenwald, New York Times bestselling author of Conspiracy of Fools and The Informant

“Peter Robison's compelling and richly reported Flying Blind is about so much more than the sad decline of Boeing and the tragic mistakes that led to the 737 Max disaster. It's also the urgent story of how the almighty profit motive supplanted a culture of engineering excellence in boardrooms across America and the avoidable calamity that has impacted all of us as a result.”
—Brad Stone, New York Times bestselling author of Amazon Unbound and The Everything Store

“Peter Robison's Flying Blind is the astoundingly well reported and beautifully told story of the downfall of what was once a great American company.  Robison, who got to know Boeing in the late 1990s as a beat reporter, watched as the proud engineering culture was decimated by those who cared first and foremost about making money.  The details are unique, but what makes this book a must-read is that the story's theme has become all too common.”
—Bethany McLean, New York Times bestselling co-author of The Smartest Guys in the Room

"Flying Blind is a gripping narrative and required reading for anyone who wants to understand how one of America’s mightiest corporations veered so badly off course."
—Sheelah Kolhatkar, New Yorker staff writer and New York Times bestselling author of Black Edge

"A startling investigation of the corporate blunders behind the tragedies that claimed the lives of 346 passengers."
—Sunday Times (UK)

"A remarkable look at corporate culture's impact on consumer safety, Flying Blind is a captivating and unsettling portrait of Boeing and American business."
—Booklist (starred review)

"[A] revealing exposé…A damning, highly readable account of a once-great company brought to its knees by bad leadership."
—Kirkus

"A gripping tale...Robison’s fast-paced account serves as an excellent case study of business mismanagement...and will have broad appeal as a story about the rise and fall of a historic business."
—Library Journal (starred review)