How a King Plays: 64 Chess Tips from a Kid Champion (Hardcover) 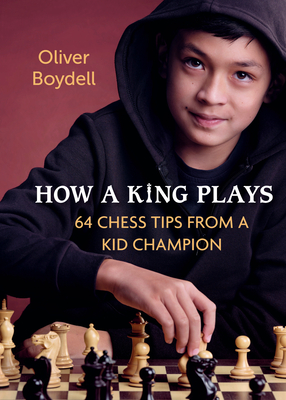 How a King Plays: 64 Chess Tips from a Kid Champion (Hardcover)


Not On Our Shelves—Ships in 1-5 Days
For fans of The Queen's Gambit comes a brand-new book from 11-year-old chess champion Oliver Boydell. How a King Plays features 64 of Boydell's tips, strategies, and ideas to help chess enthusiasts of all ages sharpen their game skills.

Whether you're new to chess or a Grandmaster, there's something for everyone in chess phenom Oliver Boydell's new book of 64 chess tips, How a King Plays.

At only 11-years-old, Boydell has already been both a National Chess Champion and a New York City Chess Champion who's competed at numerous major scholastic chess events since he started playing at the age of 5.

Now, Boydell is lending his talents to the page as he shares some of his best tips that helped him become a star. Written in his signature concise and witty voice, Boydell offers players of all levels—from beginners to advanced—a different, creative tip on every page. An introduction from the author, inspirational quotes from chess greats, and a glossary of terms help round out this comprehensive and informative, fun guide.

Jam-packed with wisdom and imaginative gameplay, this compact and portable reference book can easily be taken on the go to a tournament, to the park, or anywhere you're traveling. How a King Plays is the ideal companion for anyone whose passion for chess can't be contained.
Oliver Boydell was born in New York City to a Vietnamese mother and an English father. A National Chess Champion and a New York City Chess Champion, Oliver developed a passion for chess at the age of five. He started competing in chess tournaments during the same year and is a regular contender at New York City, New York State, and National Scholastic Chess Championships. Oliver endeavors to become a chess Grandmaster. His first book, He's Got Moves: 25 Legendary Chess Games (As Analyzed by a Smart Kid), came out in late 2020 from Metabook. He has been profiled in The New York Times, and has appeared on Good Morning America. Visit him online at www.oliverboydell.com