Giving Thanks: How Thanksgiving Became a National Holiday (Hardcover) 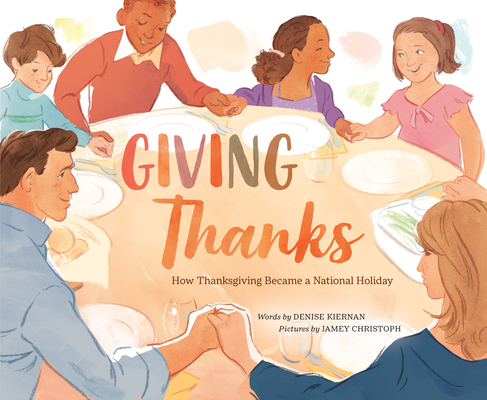 Giving Thanks: How Thanksgiving Became a National Holiday (Hardcover)


On Our Shelves Now at:
The beautifully illustrated true story of how Thanksgiving became a national holiday in America, of Sarah Josepha Hale, the woman who made the holiday happen, and of the role of gratitude the world over. Marvelously brought to life by the New York Times bestselling author Denise Kiernan.

All across the world, among hundreds of cultures and across centuries, people have come together to give thanks. But Americans didn’t have an official Thanksgiving holiday until the 1800s. The holiday Americans know today exists because of a woman named Sarah Josepha Hale, a spirited letter-writing campaign, a sympathetic president, and a civil war.

This beautifully illustrated picture book shares the true story of how Thanksgiving became a national American holiday and offers a look at the timeless and global power of gratitude.
Denise Kiernan (she/her) is an American journalist, producer and New York Times bestselling author. She has written several history books, including We Gather Together, The Last Castle, and The Girls of Atomic City. When not writing, she likes playing tennis, watching soccer, working in her garden, and cooking tasty treats at her home in North Carolina. Visit her online at denisekiernan.com. Follow her on Instagram (@iamdenisekiernan) and on Twitter (@DeniseKiernan).


Jamey Christoph's (he/him) illustrations have appeared in The New York Times, San Francisco Chronicle, and in several award winning children’s books. An old soul at heart, his work draws inspiration from vintage advertising and travel posters and a lifelong curiosity of the past, particularly in the character of old buildings, cars, fashion, and music. He has received multiple recognitions from the Society of Illustrators, Communication Arts, and 3×3 Magazine.  He works out of his 1920's home in Cleveland Heights, OH with his crazy dogs, Owen and Jack. You can visit him online at www.jameychristoph.com.
"A great addition to any library...shares a new side of the story of Thanksgiving." –School Library Journal

"Kiernan...helps to rewrite harmful narratives in an age-appropriate way for a new generation...hugely useful for parents and educators looking for better materials to describe this time of year. " –Kirkus