I Forgive Alex: A Simple Story About Understanding (Hardcover) 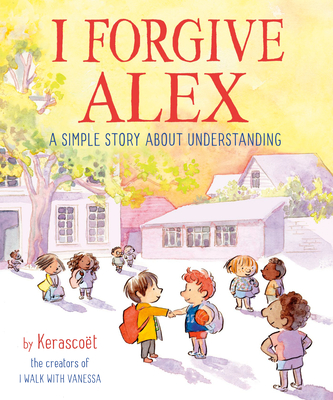 I Forgive Alex: A Simple Story About Understanding (Hardcover)


On Our Shelves Now at:
A simple, yet powerful, picture book--from New York Times bestselling creators, Kerascoët—about compassion and forgiveness.

Alex’s enthusiasm and energy can sometimes be a challenge for his classmates. He loves to play ball on the playground with his friends, but when his rambunctious behavior inadvertently upsets one of the other students, he finds himself at odds with the whole class.

A perfect companion to the picture book I Walk with Vanessa, which Parents magazine named the Best Book of the Year about kindness, this story explores the difficult feelings that come with apologies and forgiveness. In a story that sees the perspective of both sides, Alex learns quickly that the right thing to do is say he’s sorry, leaving it up to his friend to find the compassion and empathy to accept it.

This wordless picture book is a good reminder that it’s important to take responsibility for a mistake but that it’s equally important to be ready to forgive.

Kerascoët, a husband-and-wife team, are the illustrators of the picture book I Walk with Vanessa which received three starred reviews and was named The Best Picture Book of 2018 that Champions Kindness by Parents Magazine. They are also the illustrators of Malala's Magic Pencil by Malala Yousafzai which was highly acclaimed and a New York Times bestseller.
★ "A wonderful lesson in forgiveness and inclusion" —School Library Journal, starred review