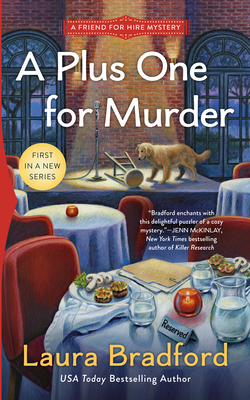 This is book number 1 in the A Friend for Hire Mystery series.

Emma Westlake has always wanted to be her own boss. But after sinking all her cash into a business that went belly-up, Emma finds herself in a penniless pickle. Dottie Adler, Emma’s elderly teatime companion, suggests she try to get paid for doing something she’s really good at—being a friend. Emma thinks it’s a crazy idea until requests start pouring in. Big Max, an eccentric local, wants her to act as his wingwoman at the local senior center’s upcoming dance, nurse practitioner Stephanie needs a workout partner, and writer Brian Hill asks Emma to be his cheering section at an open mic night.

Brian will be reading from his latest work and wants to know someone will clap for him when he’s done. He tells Emma that the room will be filled with people he’s invited—four of whom would like to kill him. Emma is confident he’s joking, but when Brian steps up to the mic and promptly drops dead, she’s not so sure anymore. As one of the last people to see him alive, Emma finds herself on a handsome cop’s radar. Now she’ll have to cozy up to a killer to save her skin and her brand-new career.

While spending a rainy afternoon at a friend’s house as a child, Laura Bradford fell in love with writing over a stack of blank paper, a box of crayons, and a freshly sharpened number-two pencil. From that moment forward, she never wanted to do or be anything else. Today, Laura is the USA Today bestselling author of the Amish Mysteries, including Just Plain Murder and A Churn for the Worse. She is also the author of the Emergency Dessert Squad Mysteries, and, as Elizabeth Lynn Casey, she wrote the Southern Sewing Circle Mysteries.

Praise for A Plus One For Murder

“A freshly original concept, an ingenious plot, and an adorable dog named Scout. You don’t want to miss this series!”—Terrie Farley Moran, Agatha Award–winning coauthor of the Murder, She Wrote mystery series

"[Bradford's] mastery of the Amish culture adds a dimension to her work that readers will likely find fascinating."--Richmond Times-Dispatch