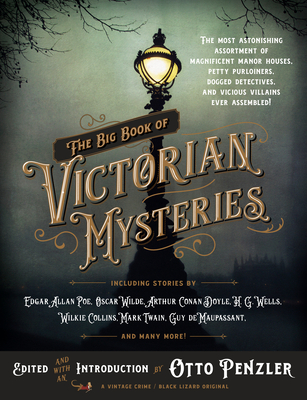 Behind the velvet curtains of horsedrawn carriages and amid the soft glow of the gaslights are the detectives and bobbies sniffing out the safecrackers and petty purloiners who plague everything from the soot-covered side streets of London to the opulent manors of the countryside. With his latest title in the Big Book series, Otto Penzler is cracking cases and serving up the most thrilling, suspenseful Victorian mysteries.

This collection brings together incredible stories from Arthur Conan Doyle, Thomas Hardy, Oscar Wilde, Charles Dickens, Wilkie Collins, and Guy de Maupassant among other legendary writers of the grand era of the British Empire. So brush off your dinner jackets and straighten out your ball gowns for these exciting, glitzy mysteries.

A VINTAGE CRIME/BLACK LIZARD ORIGINAL
Otto Penzler, proprietor of The Mysterious Bookshop in New York City, founded The Mysterious Press in 1975, now an imprint at Grove/Atlantic, and publishes classic crime fiction through MysteriousPress.com. Penzler has won two Edgar Awards, MWA’s Ellery Queen Award and the Raven. He has been given Lifetime Achievement awards by Noircon and The Strand Magazine. His new company, Penzler Publishers, launched its imprint American Mystery Classics in October 2018; it is devoted to reissuing classic American mysteries in hardcover and paperback.