What Can I Do?: The Path from Climate Despair to Action (Paperback) 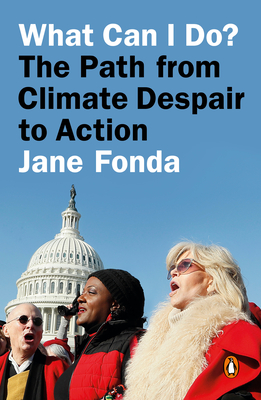 What Can I Do?: The Path from Climate Despair to Action (Paperback)


In Stock—Click for Locations
A call to action from Jane Fonda, one of the most inspiring activists of our time, urging us to wake up to the looming disaster of climate change and equipping us with the tools we need to join her in protest

In 2019, daunted by the looming disaster of climate change and inspired by Greta Thunberg, Naomi Klein, and student climate strikers, Jane Fonda asked herself one question: What can I do?

Jane Fonda, one of the most influential activists of our time, moved to Washington, D.C., and has since led thousands of people in demonstrations on Capitol Hill. In launching Fire Drill Fridays, Fonda teamed up with Greenpeace, leading climate scientists, and community organizers not only to understand what’s at stake, but to equip all of us with the education and tools we need to join her in protest.

What Can I Do? isn’t a wish list—it’s a to-do list. So many of us recognize the urgency in stemming the tide of climate change but aren’t sure where to start. Our window of opportunity to act is quickly closing. And it isn’t only Earth’s life-support systems that are unraveling, so too is our social fabric. This is going to take an all-out war on drilling, fracking, deregulation, racism, misogyny, colonialism, and despair—all at the same time. The problems we face now require every one of us to join the fight for not only our immediate future, but for the future of generations to come.

100% of the author's net proceeds from What Can I Do? have gone to Greenpeace
Jane Fonda is a two-time Oscar winner and an Emmy award–winning American actress and a political activist. She sits on the boards of V-Day: Until the Violence Stops, the Women’s Media Center (which she cofounded in 2004), the Georgia Campaign for Adolescent Power & Potential, and Homeboy Industries. She lives in Los Angeles.
"“What Can I Do?” isn’t a rhetorical question...The Oscar Award-winning actress and committed activist sounds the alarm on looming climate disaster, providing readers with actions they can take to create positive change in a world on the brink." —USA Today

"An informative guide to getting involved in the fight against climate change."— Publishers Weekly