It's Not TV: The Spectacular Rise, Revolution, and Future of HBO (Hardcover) 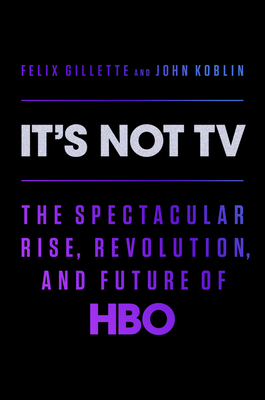 It's Not TV: The Spectacular Rise, Revolution, and Future of HBO (Hardcover)


On Our Shelves Now at:
“A read so riveting, it's not hard to imagine watching it unfold on Sunday nights.” —The Associated Press

“An incisive account that is more than a rosy victory lap for one of TV’s most influential channels.” —Eric Deggans, NPR’s “Books We Love”

The inside story of HBO, the start-up company that reinvented television—by two veteran media reporters

HBO changed how stories could be told on TV. The Sopranos, Sex and the City, The Wire, Game of Thrones. The network’s meteoric rise heralded the second golden age of television with serialized shows that examined and reflected American anxieties, fears, and secret passions through complicated characters who were flawed and often unlikable. HBO’s own behind-the-scenes story is as complex, compelling, and innovative as the dramas the network created, driven by unorthodox executives who pushed the boundaries of what viewers understood as television at the turn of the century. Originally conceived by a small upstart group of entrepreneurs to bring Hollywood movies into living rooms across America, the scrappy network grew into one of the most influential and respected players in Hollywood. It’s Not TV is the deeply reported, definitive story of one of America’s most daring and popular cultural institutions, laying bare HBO’s growth, dominance, and vulnerability within the capricious media landscape over the past fifty years.

Through the visionary executives, showrunners, and producers who shaped HBO, seasoned journalists Gillette and Koblin bring to life a dynamic cast of characters who drove the company’s creative innovation in astonishing ways—outmaneuvering copycat competitors, taming Hollywood studios, transforming 1980s comedians and athletes like Chris Rock and Mike Tyson into superstars, and in the late 1990s and 2000s elevating the commercial-free, serialized drama to a revered art form. But in the midst of all its success, HBO was also defined by misbehaving executives, internal power struggles, and a few crucial miscalculations.

As data-driven models like Netflix have taken over streaming, HBO’s artful, instinctual, and humanistic approach to storytelling is in jeopardy. Taking readers into the boardrooms and behind the camera, It’s Not TV tells the surprising, fascinating story of HBO’s ascent, its groundbreaking influence on American business, technology, and popular culture, and its increasingly precarious position in the very market it created.
Felix Gillette is the enterprise editor for Bloomberg News’s media, entertainment, and telecom team, as well as a features writer for Bloomberg Businessweek. He has covered the business of media and technology for over a dozen years and has worked as a staff writer at the Washington City Paper, the Columbia Journalism Review, The Village Voice, and The New York Observer.

John Koblin is a media reporter for The New York Times, covering the television industry. He reports on the companies and personalities behind the scripted-TV boom as well as the networks that broadcast the news. Prior to joining the Times, he covered media at The New York Observer, Women’s Wear Daily, and Deadspin.
Praise for It's Not TV

“A revealing picture of a cultural and business institution from its beginnings to the challenges it now faces. . . . A fascinating account of HBO’s business practices show how the cable network and eventual streaming service struggled to keep up with the world it helped create. . . . Gillette and Koblin’s deep reporting and sourcing are what make It’s Not TV come together so well. The result is a read so riveting, it’s not hard to imagine watching it unfold on Sunday nights.”
—The Associated Press

“An incisive account that is more than a rosy victory lap for one of TV’s most influential channels.”
—Eric Deggans, NPR’s “Books We Love”

“A story of risk, reward, power, money, celebrity, and the fate of modern media so delicious that it could be pulled straight from a Sunday-night prestige drama–no wonder, it’s the no-hold-barred history of HBO. In this fascinating look at one of the defining entertainment juggernauts of our time, John Koblin and Felix Gillette get to the heart of what made HBO the towering success it became, how that success was almost thwarted by the very people who built it, and what the future holds for one of the most recognizable brands in culture.”
—Town and Country’s “45 Must-Read Books of Fall”

“You’ve likely heard the expression ‘Peak TV’ to describe the era we’re living through. HBO has been a big part of that, both in terms of its cultural footprint and the template it established for numerous networks and streaming services. Felix Gillette and John Koblin’s new book revisits the network’s past and chronicles how it continues to shape the medium of television.”
—Inside Hook

"Comprehensive and brisk. . . . The authors are especially sharp in highlighting the contradictions in HBO’s recent investment in 'female-centric' shows. . . . A thorough, warts-and-all account of an entertainment industry giant."
—Publishers Weekly

“Throughout their comprehensively detailed account, Gillette and Koblin remain fair-minded in their reportage, accentuating not only HBO’s successes, but also its many failures. Though their brisk narrative is straightforward, it contains plenty of business melodrama. . . . Entertainment buffs will find this report of a risk-taking network fascinating.”
—Kirkus Reviews

“Bringing in business, media, and art history, journalist-raconteurs Gillette (of Bloomberg News) and Koblin (The New York Times) snappily tell the sprawling life story of cable network HBO, from a destination for boxing matches broadcast around the world via new satellite technology in the 1970s, through its Y2K heyday with such hit Sunday nights shows as The Sopranos and Sex and the City, to its power plays in the arena where everyone, and everything, is streaming. . . . Bingeworthy material for fans of behind-the-scenes media tales.”
—Booklist

“Felix Gillette and John Koblin go well beyond a simple history of the seminal pay TV channel. It's Not TV is also the thrilling story of our modern lives—a surprisingly deep chronicle about technology, shifting workplace mores, bare-knuckle industry politics and the franchises that shaped a generation, from The Sopranos to Game of Thrones.”
—Brad Stone, New York Times bestselling author of The Everything Store and Amazon Unbound

“A sweeping, deeply reported chronicle of one of the great media and business stories of the last 50 years. It’s Not TV delivers the definitive account of all the drama at HBO—on-camera and off—and in the process illuminates the rise of television’s new Golden Age and the vivid characters and personalities that have driven it.”
—Joshua Green, #1 New York Times bestselling author of Devil’s Bargain

“Tony Soprano, Selena Meyer, the House of Stark: It's nearly impossible to think of the recent decades of popular culture without thinking of HBO. And in this engaging, clear-eyed, and spirited book, Felix Gillette and John Koblin take us inside one of the most essential American institutions of the last forty years. History isn't just politics and presidents; it's also artists and writers, directors and producers, executives and showrunners. Here is their story.”
—Jon Meacham, #1 New York Times bestselling author of The Soul of America

“A gripping account of the reinvention of television, at a perfect and pivotal cultural moment, just as television is being re-invented, yet again. This exploration of HBO's coming of age is as dynamic as one of the cable channel’s own hits, complete with compelling characters and dramatic plot twists.”
—Emily Chang, author of National Bestseller Brotopia

“It’s Not TV isn't just a journey through the cultural nostalgia of an era-defining network, it’s a peek into the machinery of the dream factory itself—how a few cable cowboys and unlikely executives exploded the concept of televised storytelling, employing risk-taking auteurs who could mine the darker corners of the American psyche and adding a healthy dose of marketing moxie. Journalists Felix Gillette and John Koblin report the hell out of the history and uncover the secret corners and untold tales of an American institution. A must-read for media obsessives.”
—Joe Hagan, author of Sticky Fingers

“It's not just the definitive story of the most influential media businesses of all time; It's Not TV is the definitive cultural history of the age of peak TV. Felix Gillette and John Koblin have uncovered a gripping behind-the-scenes narrative that will change the way you see the shows you thought you knew so well.”
—Max Chafkin, author of The Contrarian

“A riveting, lively account that brings us inside the boardrooms, high end restaurants and talent trailers of the people who brought us HBO, one of the great cultural forces of our time.”
—Sheelah Kolhatkar, New Yorker staff writer and New York Times bestselling author of Black Edge

“It’s Not TV is not a perfect hero’s journey; the people building HBO into a cultural behemoth don’t always get it right and are not always role models. But as HBO’s creative minds would tell you, human complexity is exactly what makes a good story. Felix Gillette and John Koblin take you into the writers’ rooms and executive suites where all the thorny decisions get made about what’s worth putting on our screens. The result is lively and revealing, and will compel you to re-watch some favorite series—and TV in general—through an entirely different lens.”
—Sarah Frier, author of No Filter

“To understand the last 50 years in American culture, you need to understand HBO, and Felix Gillette and John Koblin get it better than anyone ever has. It’s Not TV documents the staggering rise of an entertainment behemoth, but it never devolves into hagiography. This is a messy, infuriating, and inspiring story about human brilliance and human frailty.”
—Josh Levin, author of The Queen

“Media-focused readers may enjoy the executives’, actors’, directors’, and producers’ personal accounts and the abbreviated storylines that review salient aspects of popular culture and iconic shows like The Sopranos, The Wire, Game of Thrones, Six Feet Under, The Larry Sanders Show, and Succession.”
—Library Journal