The Elements of Journalism, Revised and Updated 4th Edition: What Newspeople Should Know and the Public Should Expect (Paperback) 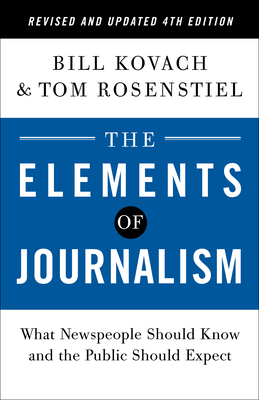 The Elements of Journalism, Revised and Updated 4th Edition: What Newspeople Should Know and the Public Should Expect (Paperback)


Not On Our Shelves—Ships in 1-5 Days
A timely new edition of the classic journalism text, now featuring updated material on the importance of reporting in the age of media mistrust and fake news—and how journalists can use technology to navigate its challenges

More than two decades ago, the Committee of Concerned Journalists gathered some of America’s most influential newspeople and asked them, “What is journalism for?” Through exhaustive research, surveys, interviews, and public forums, the committee identified the essential elements that define journalism and its role in our society. The result is one of the most important books on media ever written—winner of the Goldsmith Book Prize from Harvard, a Society of Professional Journalists Award, and the Bart Richards Award for Media Criticism from Penn State University.

Updated with new material covering the ways journalists can leverage technology to their advantage, especially given the shifting revenue architecture of news—and with the future of news, facts, and democracy never more in question—this fourth edition of The Elements of Journalism is the authoritative guide for journalists, students, and anyone hoping to stay informed in contentious times.
Bill Kovach was editor of The Atlanta Journal-Constitution, the Washington bureau chief for The New York Times, and curator of the Nieman Foundation for Journalism fellowship program at Harvard. He was founding chairman of the Committee of Concerned Journalists.

Tom Rosenstiel is executive director of the American Press Institute, founder of the Project for Excellence in Journalism, a former media critic for the Los Angeles Times, and chief congressional correspondent for Newsweek. He and Kovach have written two other books together, Warp Speed and Blur.