Ottolenghi Test Kitchen: Shelf Love: Recipes to Unlock the Secrets of Your Pantry, Fridge, and Freezer: A Cookbook (Paperback) 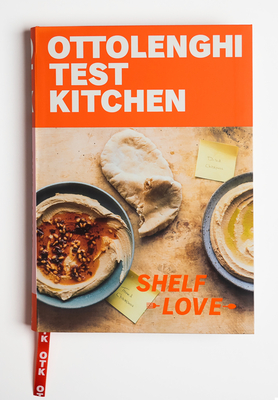 Ottolenghi Test Kitchen: Shelf Love: Recipes to Unlock the Secrets of Your Pantry, Fridge, and Freezer: A Cookbook (Paperback)


On Our Shelves Now at:
NEW YORK TIMES BESTSELLER • From the bestselling author and his superteam of chefs, this is Ottolenghi unplugged: 85+ irresistible recipes for flexible, everyday home cooking that unlock the secrets of your pantry, fridge, and freezer

ONE OF THE BEST COOKBOOKS OF THE YEAR: Boston Globe, Minneapolis Star Tribune, Epicurious, Serious Eats

Led by Yotam Ottolenghi and Noor Murad, the revered team of chefs at the Ottolenghi Test Kitchen gives everyday home cooks the accessible yet innovative Middle Eastern-inspired recipes they need to put dinner on the table with less stress and less fuss in a convenient, flexibound package. With fit-for-real-life chapters like “The Freezer Is Your Friend,” “That One Shelf in the Back of Your Pantry,” and “Who Does the Dishes?” (a.k.a. One-Pot Meals), Shelf Love teaches readers how to flex with fewer ingredients, get creative with their pantry staples, and add playful twists to familiar classics.

All the signature Ottolenghi touches fans love are here—big flavors, veggie-forward appeal, diverse influences—but are distilled to maximize ease and creative versatility. These dishes pack all the punch and edge you expect from Ottolenghi, using what you've got to hand—that last can of chickpeas or bag of frozen peas—without extra trips to the grocery store. Humble ingredients and crowd-pleasing recipes abound, including All-the-Herbs Dumplings with Caramelized Onions, Mac and Cheese with Za'atar Pesto, Cacio e Pepe Chickpeas, and Crispy Spaghetti and Chicken.

With accessible recipe features like MIYO (Make It Your Own) that encourage ingredient swaps and a whimsical, lighthearted spirit, the fresh voices of the Ottolenghi Test Kitchen will deliver kitchen confidence and joyful inspiration to new and old fans alike.
The Ottolenghi Test Kitchen includes Yotam Ottolenghi, the seven-time New York Times bestselling cookbook author; Noor Murad, crowned the queen of Middle Eastern feasts; Verena Lochmuller, the human search engine to every baking question; Tara Wigley, the in-house word wizard; Chaya Pugh, who adds heaped spoonfuls of spicy personality to the brew; and Gitai Fisher, the man who keeps everyone in check while making sure they stay out of trouble.

Yotam Ottolenghi is the restaurateur and chef-patron of the four London-based Ottolenghi delis, as well as the NOPI and ROVI restaurants. His cookbooks have sold over seven million copies worldwide. Amongst several prizes, Ottolenghi Simple won the National Book Award and was selected as a best book of the year by the New York Times. Yotam is a weekly columnist for the Saturday Guardian and a regular contributor to the New York Times. His championing of vegetables, as well as ingredients once seen as "exotic," has led to what some call "the Ottolenghi effect": meals full of color, flavor, bounty, and sunshine. Yotam lives in London with his family.

Noor Murad is a Bahraini-born chef whose international work experience eventually brought her to the Ottolenghi family in 2016. She developed recipes for the books Falastin and Ottolenghi Flavor, as well as for Ottolenghi's MasterClass series and other online Ottolenghi publications. Her Bahraini roots have a strong influence on her cooking, with Arabic, Persian, and Indian flavors making a prominent appearance in her recipes.
“Every recipe offers full-on flavour: bold and vivid in the way we have come to recognise as distinctly Ottolenghian” —Nigella Lawson