How She Did It: Stories, Advice, and Secrets to Success from Fifty Legendary Distance Runners (Paperback) 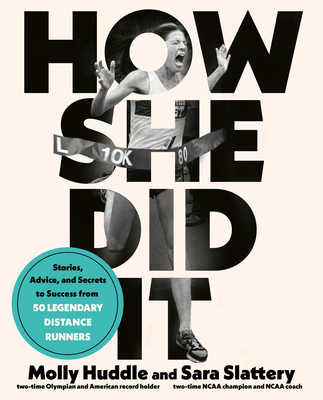 How She Did It: Stories, Advice, and Secrets to Success from Fifty Legendary Distance Runners (Paperback)


Not On Our Shelves—Ships in 1-5 Days
The ultimate roadmap for female distance runners, from two-time Olympian Molly Huddle and two-time NCAA champion Sara Slattery—featuring 50 candid interviews with women who’ve made it

The road from a high school track to an Olympic starting line is long and sometimes shadowy. Obstacles like chronic injuries, under-fueled nutrition, and coercive coaching can threaten to derail careers before they’ve even begun. Frustrated by seeing young talent burn out before reaching their potential, professional distance runner Molly Huddle and college coach Sara Slattery have teamed up with trailblazing running legends and sports medicine professionals to create an essential guide to reach your running potential.

This is How She Did It—an instructional and inspirational collection of stories and advice for female runners. The book begins with key information from the professionals who help make athletic excellence possible: trainers, physicians, nutritionists, and sports psychologists. Then, you’ll hear the first-person accounts of fifty women who’ve done it themselves. From the pioneers who fought tirelessly for women’s inclusion in the sport to the names splashed across headlines today, featured athletes include:

With Molly and Sara guiding the way, these athletes share their empowering stories, biggest regrets, funniest moments, and hard-won advice. Collectively, these voices are the embodiment of strength, meant to educate, inspire, and motivate you to see how far—and how fast—you can go.
Molly Huddle Molly Huddle is a two-time Olympian for Team USA in the 5,000 meters and10,000 meters, a six-time American record holder, and a twenty-eight-time USA champion across road and track events. She lives between and trains in Providence, Rhode Island, and Scottsdale, Arizona, alongside her husband, Kurt Benninger, and her Yorkie mix named Rusty.

Sara Slattery is an American middle- and long-distance runner who competed in track, cross-country,and road races. Slattery has represented the United States at the IAAF World Cross-Country Championships at both junior and senior level, and was a four-time NCAA champion. She is currently the head men’s and women’s cross-country coach at Grand Canyon University and is one of the few women coaching both teams.