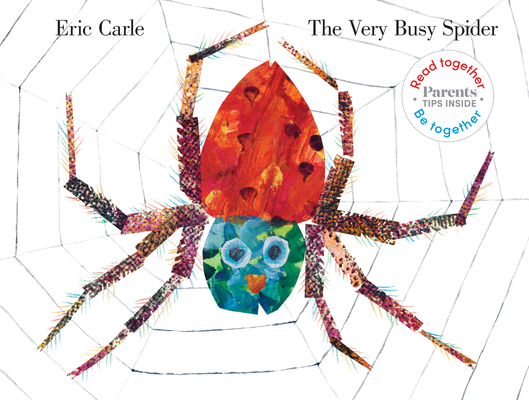 
Special Order—Subject to Availability
Make family reading a regular and cherished activity with The Very Busy Spider and READ TOGETHER, BE TOGETHER, a nationwide movement developed by Penguin Random House in partnership with Parents magazine.

Over 50 million people have fallen in love with The Very Busy Spider! Now parents and educators alike can introduce this beloved character to younger readers with this picture book by Eric Carle, creator of The Very Hungry Caterpillar.

Early one morning a little spider blown by the wind spins her web on a farm yard fence post. One by one, the animals of the nearby farm try to distract her, yet the busy little spider keeps diligently at her work. When she is done, she is able to show everyone that not only is her creation quite beautiful, it is also quite useful!

Picture books in the READ TOGETHER, BE TOGETHER program are available at a low price for a limited time so that families everywhere can make the most of storytime. Other titles include:

• Horton Hears a Who (Dr. Seuss)
• Llama Llama Misses Mama (Anna Dewdney)
• Richard Scarry's Cars and Trucks and Things That Go (Richard Scarry)
• The Little Engine That Could (Watty Piper)
• The Very Busy Spider (Eric Carle)
Eric Carle is acclaimed and beloved as the creator of brilliantly illustrated and innovatively designed picture books for very young children. His best-known work, The Very Hungry Caterpillar, has been translated into 70 languages and sold over 55 million copies. Carle illustrated more than seventy books, many best sellers, most of which he also wrote, and more than 170 million copies of his books have sold around the world. In 2003, Carle received the Laura Ingalls Wilder Award (now called the Children’s Literature Legacy Award) for lifetime achievement in children's literature. In 2002, Eric and his wife, Barbara, cofounded The Eric Carle Museum of Picture Book Art (www.carlemuseum.org) in Amherst, Massachusetts, a 40,000-square-foot space dedicated to the celebration of picture books and picture book illustrations from around the world, underscoring the cultural, historical, and artistic significance of picture books and their art form. Eric Carle passed away in May 2021 at the age of 91. His work remains an important influence on artists and illustrators at work today. www.eric-carle.com
Praise for The Very Busy Spider:

* "A beautifully executed work for the very young that satisfies the needs of both visually handicapped and sighted children without losing its artistic integrity."--The Horn Book, starred review

* "Both sighted and blind children will follow the action with ease . . . Visually and verbally, this is a winner."--Booklist, starred review