The First Survivors of Alzheimer's: How Patients Recovered Life and Hope in Their Own Words (Paperback) 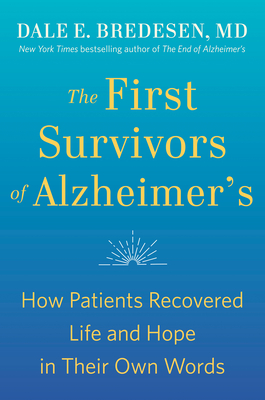 The First Survivors of Alzheimer's: How Patients Recovered Life and Hope in Their Own Words (Paperback)


Not On Our Shelves—Ships in 1-5 Days
First person stories of patients who recovered from Alzheimer's Disease--and how they did it.

It has been said that everyone knows a cancer survivor, but no one has met an Alzheimer's survivor – until now. In his first two books, Dr. Dale Bredesen outlined the revolutionary treatments that are changing what had previously seemed like the inevitable outcome of cognitive decline and dementia.  And in these moving narratives, you can hear directly from the first survivors of Alzheimer’s themselves--their own amazing stories of hope told in their own words.

These first person accounts honestly detail the fear, struggle, and ultimate victory of each patient's journey. They vividly describe what it is like to have Alzheimer's. They also drill down on how each of these patients made the program work for them--the challenges, the workarounds, the encouraging results that are so motivating. Dr. Bredesen includes commentary following each story to help point readers to the tips and tricks that might help them as well.

Dr. Bredesen's patients have not just survived; they have thrived to rediscover fulfilling lives, rewarding relationships, and meaningful work. This book will give unprecedented hope to patients and their families.
Dale E. Bredesen, M.D., is internationally recognized as an expert in the mechanisms of neurodegenerative diseases such as Alzheimer's disease, and the author of the New York Times bestsellers The End of Alzheimer's (Avery, 2017) and The End of Alzheimer's Program (Avery, 2020), as well as The First Survivors of Alzheimer’s (Avery, 2021). He has held faculty positions at UC San Francisco, UCLA, and the University of California San Diego, and directed the Program on Aging at the Burnham Institute before coming to the Buck Institute for Research on Aging in 1998 as its founding president and CEO. He is currently a professor at UCLA.
"Perhaps the most important quality for Alzheimer’s patients and their families is hope, and in The First Survivors of Alzheimer’s, seven survivors offer genuine hope, both with their poignant stories and with their descriptions of the protocol details that led to their own successes. This is an inspiring book for the millions dealing with the challenges of cognitive decline and for those who want to prevent it."—Arianna Huffington, Founder & CEO, Thrive Global

"Dr. Bredesen takes us beyond the scientific validation of his program to reveal the depth of the personal narrative of those brave and pioneering individuals who chose to participate in his vanguard, approach to their illness... Although it challenged them and their loved ones to the core, they were rewarded with recovery."—David Perlmutter, MD, FACN, Board-certified neurologist, author, #1 New York Times bestseller, Grain Brain and Brain Wash

"In The First Survivors of Alzheimer’s, 7 patients describe their struggles and ultimate triumphs, using the protocol developed by Dr. Bredesen. This book restores hopes for the millions of families impacted by Alzheimer's!"—Terry Wahls, MD and author The Wahls Protocol

"Amazing success stories of Alzheimer's patients that have been victorious in using the revolutionary program that the author, renowned neurology scientist and clinical innovator,  Dr. Dale Bredesen has developed. This is a must read for all those that have heard that Alzheimer’s is an untreatable disease."—Jeffrey Bland, PhD, FACN, FACB, President of Personalized Lifestyle Medicine Institute and Founder of Institute for Functional Medicine

"In his new book, The First Survivors of Alzheimer’s, Dr. Dale Bredesen continues to amaze and hearten readers who are either suffering from memory issues, have a loved one with memory issues, or have been told that they carry the Apo E 4 gene, and that it is only a matter of time until memory loss occurs. I have had the pleasure of knowing Dr Bredesen for many years now and have even shared mutual patients, so I know first hand that he knows what' he's doing! In uplifting patient stories, told in their own words, in easy to follow advice, and the reasons for that advice, Dr Bredesen has again written the definitive testing, eating, and life-style plan to not only reverse dementia, but perhaps more importantly, as he and I do daily in our practices, prevent it from happening in the first place. Your mind (and your whole body) will thank you for reading and following this book!"—Steven R Gundry MD, four time NYTs bestselling author of The Plant Paradox, The Longevity Paradox and Founder and Medical Director of The International Heart and Lung Institute and The Centers for Restorative Medicine