The Journey of Humanity: The Origins of Wealth and Inequality (Hardcover) 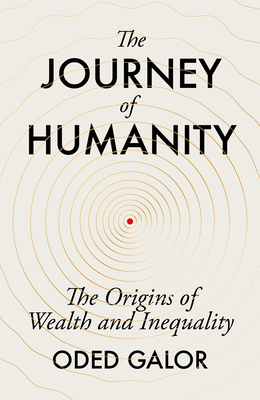 The Journey of Humanity: The Origins of Wealth and Inequality (Hardcover)


On Our Shelves Now at:
A landmark, radically uplifting account of our species’ progress, from one of the world's preeminent thinkers.

“Unparalleled in its scope and ambition…All readers will learn something, and many will find the book fascinating.’—The Washington Post

“A wildly ambitious attempt to do for economics what Newton, Darwin or Einstein did for their fields: develop a theory that explains almost everything.” —The New Statesman

“[A] sweeping overview of cultural, technological and educational forces... Its breadth and ambition are reminiscent of Diamond’s Guns, Germs, and Steel and Harari’s Sapiens.”—Financial Times

“Astounding in scope and insight...provides the keys to the betterment of our species.”—Nouriel Roubini, author of Crisis Economics

“A masterful sweep through the human odyssey.... If you liked Sapiens, you'll love this.” —Lewis Dartnell, author of Origins

“Oded Galor's attempt to unify economic theory is impressive and insightful.” —Will Hutton, The Guardian

“It's a page-turner, a suspense-filled thriller full of surprises, mind-bending puzzles and profound insights!”—Glenn C. Loury, author of The Anatomy of Racial Inequality

In a captivating journey from the dawn of human existence to the present, world-renowned economist and thinker Oded Galor offers an intriguing solution to two of humanity’s great mysteries.

Why are humans the only species to have escaped—only very recently—the subsistence trap, allowing us to enjoy a standard of living that vastly exceeds all others? And why have we progressed so unequally around the world, resulting in the great disparities between nations that exist today? Galor’s gripping narrative explains how technology, population size, and adaptation led to a stunning “phase change” in the human story a mere two hundred years ago. But by tracing that same journey back in time and peeling away the layers of influence—colonialism, political institutions, societal structure, culture—he arrives also at an explanation of inequality’s ultimate causes: those ancestral populations that enjoyed fruitful geographical characteristics and rich diversity were set on the path to prosperity, while those that lacked it were disadvantaged in ways still echo today.

As we face ecological crisis across the globe, The Journey of Humanity is a book of urgent truths and enduring relevance, with lessons that are both hopeful and profound: gender equality, investment in education, and balancing diversity with social cohesion are the keys not only to our species’ thriving but to its survival.
Oded Galor is Herbert H. Goldberger Professor of Economics at Brown University and the founding thinker behind Unified Growth Theory, which seeks to uncover the fundamental causes of development, prosperity, and inequality over the entire span of human history. He has shared the insights of his lifetime’s work in this field at some of the most prestigious lectures around the globe and has now distilled those discoveries into The Journey of Humanity, which is being published in twenty-eight languages worldwide.
Praise for The Journey of Humanity

Forbes Top 12 Educational Podcasts to Listen to While Traveling

Best Non-Fiction: The Journey of Humanity: The Origins of Wealth and Inequality —Exberliner Magazine

I...[was] taken aback by his imagination and verve... great sections of Galor's book are to be applauded... his optimism about humanity shines through -- Will Hutton ― Observer

"An optimist's guide to the future ... Oded Galor's 'Sapiens'-like history of civilisation predicts a happy ending for humanity." ― The Guardian

“Unparalleled in its scope and ambition…. All readers will learn something, and many will find the book fascinating.”—The Washington Post

"An evidence-based antidote to doomscrolling…. The book is highly persuasive: Galor builds his case meticulously, always testing his assumptions against the evidence, and without the sense of agenda-pushing that accompanies other boosterish thinkers…. An analysis of the human condition that leads not to a counsel of despair, but a new set of tools [he believes] can help build a better future." —The Guardian

“Astounding in scope and insight, The Journey of Humanity provides a captivating and revelatory account of the deepest currents that have shaped human history and the keys to the betterment of our species.”—Nouriel Roubini, Professor Emeritus, NYU, and author of Crisis Economics: A Crash Course in the Future of Finance

“A masterful sweep through the human odyssey, from the origin of our species to the founding of civilizations and the major transitions towards the making of the modern world. Galor answers the ultimate mystery: What historical currents account for the staggering inequality in the wealth of nations today? Exquisite, eloquent and effortlessly erudite—if you liked Sapiens, you'll love this.”—Lewis Dartnell, author of Origins: How the Earth Shaped Human History

“A completely brilliant and utterly original account of humanity's transit from crude beginnings to a deeply divided planet. A vastly readable insight into why our world is as it is. A book for our epoch.”—Jon Snow, former anchor of Channel 4 News (UK)

“A wonderfully clear-sighted perspective on progress, past and future, which is essential to tackling today’s big challenges—potentially catastrophic climate change and inequality.”—Diane Coyle, author of Cogs and Monsters

“A magisterial account of the evolution of human civilization from its prehistoric origins to the present day. The Journey of Humanity is beautifully written, in elegant and accessible prose. It’s a page-turner, a suspense-filled thriller full of surprises, mind-bending puzzles and profound insights!”—Glenn C. Loury, Merton P. Stoltz Professor of the Social Sciences, Brown University, and author of The Anatomy of Racial Inequality

“Not only a succinct, unified theory of economic growth since modern humans evolved, but also an engaging and optimistic answer to anyone who thinks that poverty and inequality will always be with us."—Ian Morris, Stanford University’s Jean and Rebecca Willard Professor in Classics and author of The Measure of Civilization

“I am in awe of Oded Galor’s attempts to explain inequality today as a consequence of such profound forces. A remarkable contribution to our understanding of this mammoth dilemma.”—Jim O'Neill, author of The Growth Map

“Incredibly wide-ranging and detailed historical and even anthropological examination of the myriad factors that have brought success and failure to nations.... Lively and learned.” —Tim Hazledine

“Sweeping overview of cultural, technological, and educational forces that let countries break out of the poverty trap and become wealthy. Its breadth and ambition are reminiscent of Diamond’s Guns, Germs, and Steel and Harari’s Sapiens.”—Financial Times

“A wildly ambitious attempt to do for economics what Newton, Darwin, or Einstein did for their fields: develop a theory that explains almost everything. An inspiring, readable, jargon-free and almost impossibly erudite masterwork, the boldest possible attempt to write the economic history of humanity.” —The New Statesman

“Fascinating book...Highly exciting journey through the economic history of mankind from the Stone Age to the present day.” —Business, Frankfurter Allgemeine

“Just like the theories that promise to tie together all of physics or any other science, Galor’s work aims to make the world’s economic trajectory seem logical, even inevitable.”—American Banker

“In his recent book The Journey Of Humanity, economist Oded Galor argues that climate policy should not be restricted to cutting carbon but should also involve ‘pushing hard for gender equality, access to education and the availability of contraceptives, to drive forward the decline in fertility.’ India will do well to heed that advice.”—The New Indian Express

“The best book to read on your summer holidays.” —Irish Independent

“It explores how ancient factors like geography, culture and diversity impact today’s wealth inequality... Uses entertaining narratives to explain how this works.” —Forbes

Praise for Oded Galor and his Unified Growth Theory
“Galor’s project is breathtakingly ambitious. He proposes a fairly simple, intensely human-capital-oriented model that will accommodate the millennia of Malthusian near-stagnation, the Industrial Revolution and its aftermath of rapid growth, the accompanying demographic transition, and the emergence of modern human-capital-based growth. And the model is supposed to generate endogenously the transitions from one era to the next. The resulting book is a powerful mixture of fact, theory, and interpretation.”—Robert Solow, Nobel Laureate in Economics

“Big Science at its best. It grapples with some of the broadest questions in social science, integrating state-of-the-art economic theory with a rich exploration of a wide range of empirical evidence. Galor's erudition and creativity are remarkable, and the ideas embodied in this book will have a lasting effect on economics.” —Steven N. Durlauf, Steans Professor in Educational Policy, University of Chicago, and editor, Journal of Economic Literature