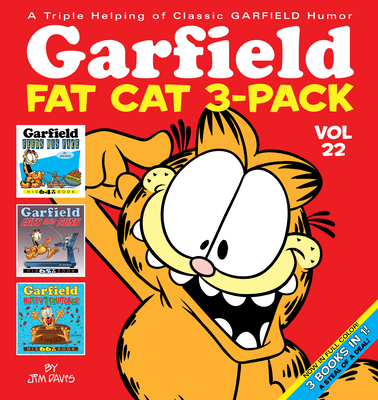 Three books in one means three times the fun! This Fat Cat 3-Pack contains Garfield Feeds His Face [#64], Garfield Eats and Runs [#65], and Garfield Nutty as a Fruitcake [#66].

Garfield fans will give three cheers for this latest crowd-pleasing collection of rude, crude cattitude!

Whether he’s besmirching a salad, moaning about mornings, or belting Jon with a volcanic belch, Garfield’s bad behavior is sure to be good for his audience.

So, grab a book and enjoy the fun: It’s showtime!

The Garfield Fat Cat 3-Pack series collects the Garfield comic-strip compilation books in a new, full-color format. Garfield may have gone through a few changes, but one thing has stayed the same: his enormous appetite for food and fun. So enjoy some supersized laughs with the insatiable cat, because too much fun is never enough!
Jim Davis's world-famous strip is syndicated in more than 2,100 newspapers with 200 million daily readers. Since Garfield's birth in 1978, his books have more than 135 million copies in print and have been translated into forty languages, and thirty-three titles have been New York Times bestsellers.