The Rise (and Falls) of Jackie Chan (Library Binding) 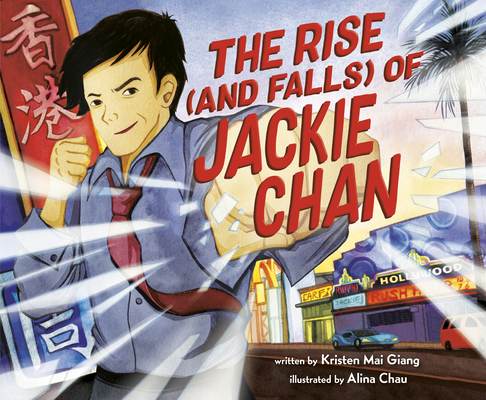 The Rise (and Falls) of Jackie Chan (Library Binding)


Not On Our Shelves—Ships in 1-5 Days
An action-packed picture book biography about Hollywood actor, stuntman, and beloved superstar Jackie Chan! A great read for Chan fans hoping to share their love of Rush Hour, Supercop, and Jackie's original brand of martial arts with their ready-to-tumble tyke.

Jackie Chan has been making movies and amazing audiences with his original and comedic stunts for decades.

But before he was an international star, Jackie grew up in relative poverty in China, studied martial arts at the grueling China Drama Academy, and worked for years trying to find his way in film.

Twist, tumble, and train alongside martial arts hero Jackie Chan in this picture book biography from lauded author Kristen Mai Giang and illustrator and Hong Kong native Alina Chau. Discover how Jackie used his goofball acrobatics to make a name and a style all his own.
Kristen Mai Giang is a Chinese American author who emigrated from Vietnam and grew up in San Gabriel, California. She is the author of the picture books Ginger and Chrysanthemum, which draws from family stories new and old, and the upcoming Last Flight, which tells of her family's escape from Saigon in 1975. Her picture book biography The Rise (and Falls) of Jackie Chan was inspired by childhood memories, specifically watching Hong Kong movies at Grauman's Chinese Theater. When not writing, Kristen has spent the past two decades creating kid-targeted Emmy Award-winning digital content for Disney, NBC Kids, and Mattel, among others. Find Kristen online at kristenmaigiang.com.

Alina Chau is an award-winning filmmaker and artist whose credits include the Emmy Award-winning Star Wars: The Clone Wars animated series, numerous bestselling games, and The Nian Monster, which received the 2018 APALA Picture Book Honor. Alina grew up in Hong Kong in an Indonesian-Chinese family during the British colonial era, and her cultural heritage strongly influences her artistic and storytelling voice. Discover more about Alina and her work at alinachau.com.
"[A] dynamic profile of a living legend." -Publishers Weekly