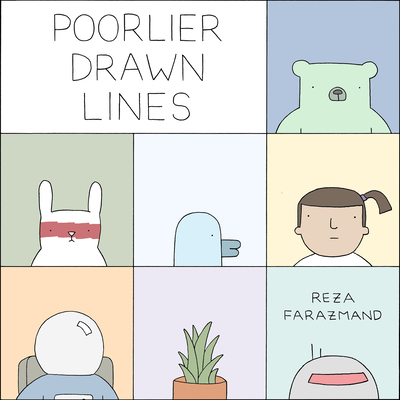 
Not On Our Shelves—Ships in 1-5 Days
Don’t Miss Poorly Drawn Lines on Cake, airing on FX and streaming on FX on Hulu!

From New York Times bestselling author and artist Reza Farazmand, a new collection of absurdist, insightful comics about surviving friendships, foes, and all of life's little quirks in the age of technology.

Poorlier Drawn Lines is the hilarious third installment of Reza Farazmand's New York Times bestselling Poorly Drawn Lines series. It follows up his 2017 hit Comics for a Strange World, and takes place in the same bizarre, now utterly beloved universe with familiar characters Reza's devoted fans love. This new collection from the webcomic artist brings his signature snark and poignant observations of these singularly strange and confusing times. In the world of Poorly Drawn Lines, nothing is too weird or too outlandish for parody.

Featuring brand-new content alongside some of the most popular comics of the past year, Poorlier Drawn Lines will be the perfect gift for the nerds in your life.
Reza Farazmand is a New York Times-bestselling author, comedy writer, and creator of the popular internet comic series Poorly Drawn Lines. He has published four books, including the graphic novel City Monster and the comic and essay collection Poorly Drawn Lines: Good Ideas and Amazing Stories, along with two followup collections: Comics for a Strange World and Poorlier Drawn Lines. His work has been featured in McSweeney’s Internet Tendency, Adventure Time comics, Buzzfeed, NPR, and on Comedy Central. He lives and draws in Los Angeles.