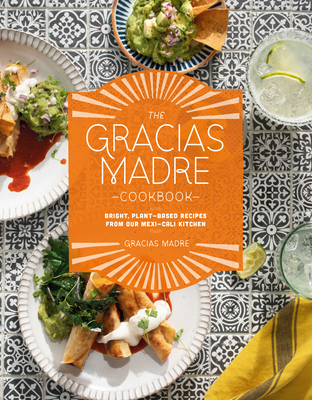 
On Our Shelves Now at:
The fresh, bright flavors of Mexico and Southern California, adapted for the plant-based home cook, from one of L.A.’s favorite restaurants.

It’s no surprise that Gracias Madre has its roots in giving gratitude. Gracias Madre means thank you, Mother in Spanish, and the phrase encapsulates the mission of this Cali-Mexican eatery, which is to serve the L.A. community and give people fresh food made with integrity from ingredients grown with love. Go figure that, in California, love is a taco.

Mexican food is, in many ways, one of the original vegan cuisines. Before the Spanish conquistadores brought with them new ingredients, including many dairy products, the Mexican pantry centered on what’s called “The Three Sisters” in Mesoamerican culture: beans, corn, and chiles. By embracing these workhorses, layering in chile- and spice-filled salsas and moles, and experimenting with creative whole-food twists on traditional meat fillings (mushroom carnitas and al pastor, jackfruit mixiote, dehydrated hibiscus) as well as nut-based cheeses (cashew crema and queso blanco, almond cotija), Gracias Madre’s menu is filled with well-loved Cali-Mexican classics. With 125 simple, entirely plant-based recipes for the home cook, including Calabaza and Onion Quesadillas, Coliflor with Cashew Nacho Cheese, and Coffee Flan, The Gracias Madre Cookbook is a vegetable-forward dive into one of the world’s most delicious cuisines.

Gracias Madre is a plant-based restaurant that was founded in San Francisco and has since opened a flagship location in West Hollywood, in addition to Newport Beach.