Too Many Cooks (Nero Wolfe #5) (Paperback) 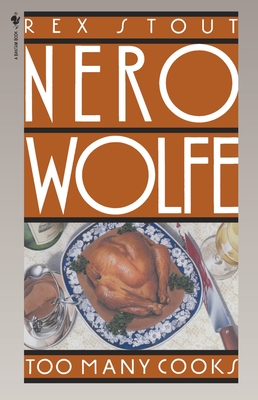 Too Many Cooks (Nero Wolfe #5) (Paperback)

This is book number 5 in the Nero Wolfe series.

As Nero Wolfe prepares to speak at a gathering of the world’s great chefs, one is found indelicately murdered. When the target for killing shifts to himself, the great detective must close this case quickly or his next meal may be his last.

Everyone knows that too many cooks spoil the broth, but you'd hardly expect it to lead to murder. But that's exactly what's on the menu at a five-star gathering of the world's greatest chefs. As guest of honor, Wolfe was lured from his brownstone to a posh southern spa to deliver the keynote address. He never expected that between courses of haute cuisine he and Archie would be compelled to detect a killer with a poison touch—a killer preparing to serve the great detective his last supper.