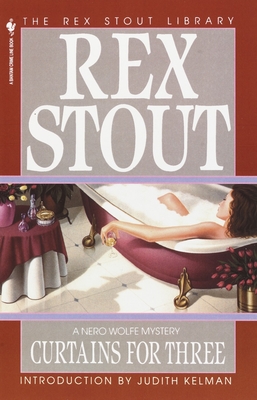 This is book number 18 in the Nero Wolfe series.

In these three baffling mysteries of motive and murder, even the great Nero Wolfe finds himself stumped. First there is the case of the two passionate lovebirds who want to make sure that neither is a cold-blooded killer. Then it’s off to the races, where Wolfe must choose from a stable of five likely suspects to corral a killer on horseback. And finally the detective finds himself the confidant of a distraught, self-described grifter who claims a murderer is stalking Wolfe’s own brownstone. Through brilliant deduction is determined to expose the truth behind the veils of illusion—and bring down the curtain on three all-too-clever murderers.