The Language of Bees: A novel of suspense featuring Mary Russell and Sherlock Holmes (Paperback) 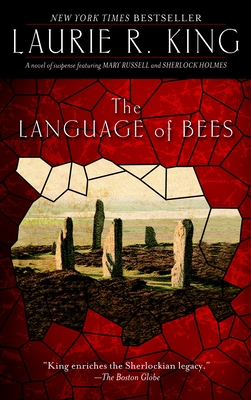 The Language of Bees: A novel of suspense featuring Mary Russell and Sherlock Holmes (Paperback)

This is book number 9 in the Mary Russell and Sherlock Holmes series.

For Mary Russell and her husband, Sherlock Holmes, returning to the Sussex coast after seven months abroad was especially sweet. There was even a mystery to solve—the unexplained disappearance of an entire colony of bees from one of Holmes’s beloved hives.

But the anticipated sweetness of their homecoming is quickly tempered by a galling memory from the past. Mary had met Damian Adler only once before, when the surrealist painter had been charged with—and exonerated from—murder. Now the troubled young man is enlisting the Holmeses’ help again, this time in a desperate search for his missing wife and child.

Mary has often observed that there are many kinds of madness, and before this case yields its shattering solution she’ll come into dangerous contact with a fair number of them. From suicides at Stonehenge to the dark secrets of a young woman’s past on the streets of Shanghai, Mary will find herself on the trail of a killer more dangerous than any she’s ever faced—a killer Sherlock Holmes himself may be protecting for reasons near and dear to his heart.
Laurie R. King is the New York Times bestselling author of thirteen Mary Russell mysteries, five contemporary novels featuring Kate Martinelli, the Stuyvesant & Grey novels Touchstone and The Bones of Paris, and the acclaimed A Darker Place, Folly, and Keeping Watch. She lives in Northern California.
"A one-woman case for the defense of unauthorized literary sequels...intelligent, witty, complex and atmospheric...By making a woman possible who matches Holmes in brainpower, as well as in depressive tendencies of mind and spare elegance of manner, King has made marriage possible for the most famous and, surely, one of the most aloof detectives of all time....A spellbinding mystery...superb." —The Washington Post Book World on Justice Hall

"A wonderful blend of sheer wit and canny ratiocination, this is mystery at its most ingenious."—The Guardian on The Art of Detection

"Mesmerizing...King does a wonderful job of probing the human psyche...All of her novels are superb."—Daily American on Locked Rooms