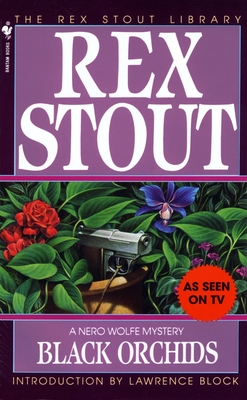 This is book number 9 in the Nero Wolfe series.

Nero Wolfe has left his comfortable brownstone for the promise of a remarkably rare black orchid at a flower show—but before Wolfe and his perennially hardy sidekick, Archie Goodwin, have a chance to stop and smell the roses, a diabolically daring murder takes place right under their noses and puts a blight on the proceedings. Now Wolfe's fancy turns to thoughts of weeding out a murderer—one who's definitely not a garden-variety killer. Only then will Wolfe be ready to throw his weight into a second  thorny case, involving a rich society widow bedeviled by poison-pen letters—and a poisonous plot as black as Wolfe's orchids . . . with roots that are even more twisted.