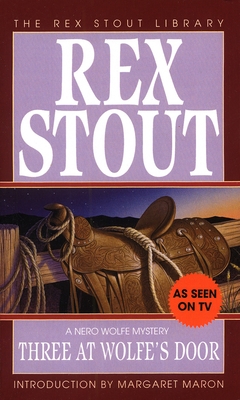 This is book number 33 in the Nero Wolfe series.

Death comes a-calling not once but three times in this murderous collection of cases from the files of Nero Wolfe, the world’s greatest detective.

First there is the exclusive dinner party where the guests are gourmets, arsenic is the appetizer, and the suspects are five of the most gorgeous gals in New York. Next, a wandering cab pulls up to Wolfe’s door, containing a lady driver who doesn’t belong . . . and a comely corpse with a knife between her ribs. And finally, a championships rodeo roars into town, featuring square-jawed cowboys, bright-eyed cowgirls, and a dead millionaire with a fancy lariat for a necktie.