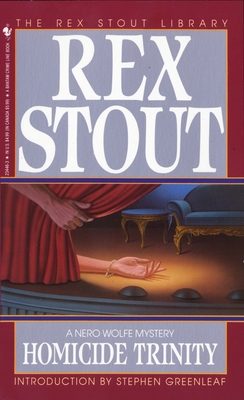 This is book number 36 in the Nero Wolfe series.

It’s a wily killer who dares to strike on Nero Wolfe’s hallowed turf—and leave a corpse strangled with Wolfe’s own soup-stained tie. But no sooner does the gourmandizing sleuth clean up this first course of murder than he faces a gun-toting wife who serves up a confession of homicidal intent—only to become the sole suspect when the corpus delicti is found. It’s murder à la carte when the third course is served: a cop-hating landlady brings Wolfe counterfeit cash—that leads to genuine murder. It’s up to Wolfe to see that the malefactors get their just deserts.