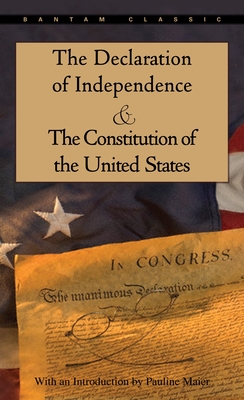 By Pauline Maier (Introduction by)


On Our Shelves Now at:
Together in one book, the two most important documents in United States history form the enduring legacy of America’s Founding Fathers including Thomas Jefferson, James Madison, and Alexander Hamilton.

The Declaration of Independence was the promise of a representative government; the Constitution was the fulfillment of that promise.

On July 4, 1776, the Second Continental Congress issued a unanimous declaration: the thirteen North American colonies would be the thirteen United States of America, free and independent of Great Britain. Drafted by Thomas Jefferson, the Declaration set forth the terms of a new form of government with the following words: "We hold these Truths to be self-evident, that all men are created equal, that they are endowed with certain unalienable Rights, that among these are Life, Liberty, and the Pursuit of Happiness."

Framed in 1787 and in effect since March 1789, the Constitution of the United States of America fulfilled the promise of the Declaration by establishing a republican form of government with separate executive, legislative, and judicial branches. The first ten amendments, known as the Bill of Rights, became part of the Constitution on December 15, 1791. Among the rights guaranteed by these amendments are freedom of speech, freedom of the press, freedom of religion, and the right to trial by jury. Written so that it could be adapted to endure for years to come, the Constitution has been amended only seventeen times since 1791 and has lasted longer than any other written form of government.
Pauline Maier was born in St. Paul, Minnesota. She received her BA from Radcliffe College in 1960, was a Fulbright Scholar at the London School of Economics in 1960-61, and took her PhD at Harvard University in 1968. She taught at Harvard, the University of Massachusetts (Boston), University of Wisconsin, Yale University, and the Massachusetts Institute of Technology, where was a William R. Kenan Jr Professor of American History. She was the author of From Resistance to Revolution, The Old Revolutionaries, and The American People: A History (a single-authored text for junior high school), as well as numerous other articles and reviews. She died in 2013.