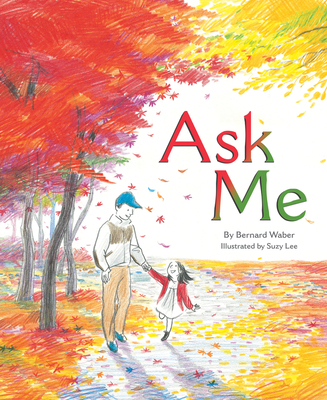 A father and daughter walk through their neighborhood, brimming with questions as they explore their world. With so many things to enjoy, and so many ways to ask—and talk—about them, it's a snapshot of an ordinary day in a world that's anything but. This story is a heartwarming and inviting picture book with a tenderly written story by Bernard Waber and glorious illustrations by Suzy Lee.

Bernard Waber was the beloved author-illustrator of more than thirty picture books, including Courage, Ira Sleeps Over, and Do You See a Mouse? With the publication of The House on East 88th Street in 1962, his Lyle, Lyle Crocodile series of books became a mainstay of children's literature and was adapted for both stage and screen. A Literary Landmark plaque commemorating the adventures of this endearing New York City reptile can now be found on East 88th Street. bernardwaber.com.

Suzy Lee is the creator of Wave and Shadow, both of which were chosen as New York Times Best Illustrated Children’s Books.

* "The patience required to converse with a small person who wants to dictate every part of the interaction is sure to be familiar to parents, but the poetic text rises above the mundane and captures the beauty, energy, and innocence of these conversations and holds them up for readers to appreciate without becoming saccharine or trite." —School Library Journal, starred review   * "Their simple back-and-forth dialogue speaks volumes about their strong father-daughter bond. As endearing and joyful as it is to read Waber's words aloud, it is Lee's illustrations that make this title truly special...Sublimely satisfying." —Kirkus, starred review   "This vicarious outing is an excellent model of one-on-one interaction that might inspire young listeners to form their own questions. An easy text for new readers, it could also help tuck in a toddler with a sweet good night." —Horn Book Magazine   "Lee's expressive artwork has a naive feel, well suited to Waber's childlike narration...the love this father and daughter share comes through loud and clear." —Booklist   * "The easygoing verbal exchange and affectionate visuals celebrate a close father-daughter relationship while recognizing beauty in everyday simplicity." —Publishers Weekly, starred review    —