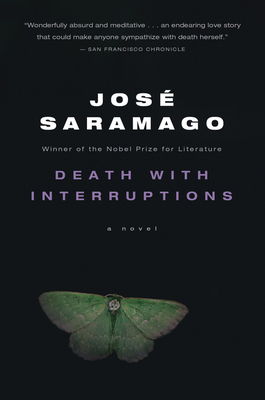 “This witty and deeply moving story begins one day when people stop dying. The series of events that follow are perfectly believable -- including complaints to the government from funeral directors reduced to pet burials. Nobel laureate Saramago has written a novel that exposes the insanities of modern life while showing us the essence of what makes it all worthwhile. Truly a modern classic.”
— Bob Sommer, Changing Hands Bookstore, Tempe, AZ

Nobel Prize-winner Jose Saramago's brilliant novel poses the question—what happens when the grim reaper decides there will be no more death? On the first day of the new year, no one dies. This of course causes consternation among politicians, religious leaders, morticians, and doctors. Among the general public, on the other hand, there is initially celebration—flags are hung out on balconies, people dance in the streets. They have achieved the great goal of humanity: eternal life. Then reality hits home—families are left to care for the permanently dying, life-insurance policies become meaningless, and funeral parlors are reduced to arranging burials for pet dogs, cats, hamsters, and parrots.
Death sits in her chilly apartment, where she lives alone with scythe and filing cabinets, and contemplates her experiment: What if no one ever died again? What if she, death with a small d, became human and were to fall in love?

JOSÉ SARAMAGO (1922–2010) was the author of many novels, among them Blindness, All the Names, Baltasar and Blimunda, and The Year of the Death of Ricardo Reis. In 1998 he was awarded the Nobel Prize for Literature.

"Saramago is arguably the greatest writer of our time . . . He has the power to throw a dazzling flash of lightning on his subjects, an eerily and impossibly prolonged moment of clarity that illuminates details beyond the power of sunshine to reveal."—Chicago Tribune   "Reading the Portuguese writer José Saramago, one quickly senses the presence of a master."—The Christian Science Monitor