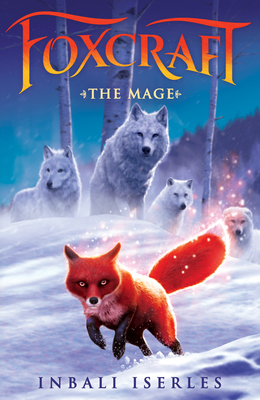 This is book number 3 in the Foxcraft series.

The final book in a thrilling fantasy trilogy starring one of the animal kingdom's most hunted heroes. Foxcraft is full of excitement and heart, and a touch of magic.Isla has arrived at the frigid Snowlands to find her lost brother, Pirie. The tundra is a harsh place -- and the wolves who live within its icy kingdoms are harsher still -- but Isla's flair for the mysterious arts of foxcraft has grown tremendously.The young fox is on a mission of grave importance. A cruel and powerful fox known as the Mage is using his own mastery of foxcraft to summon an ancient threat. If he succeeds, then more than just Pirie's life will be at stake.But Isla discovers the once-proud wolves are broken and wary. Their king is weak, struck by a peculiar madness, and a rival kingdom threatens their borders. If Isla can't find help amongst the wolves, then the whole world will burn.
Inbali Iserles is an award-winning writer and an irrepressible animal lover. She is one of the team of authors behind the New York Times bestselling Survivors series, writing under the pseudonym of Erin Hunter. Her first book, The Tygrine Cat, won the 2008 Calderdale Children's Book of the Year Award. Together with its sequel, The Tygrine Cat: On the Run, it was listed among The Independent's "50 books every child should read." Inbali attended Sussex and Cambridge Universities. For many years she lived in central London, where a fascination with urban foxes inspired her Foxcraft trilogy. She has recently moved to Cambridge with her family, including her principal writing mascot, Michi, who looks like an Arctic fox, acts like a cat, but is in fact a dog.