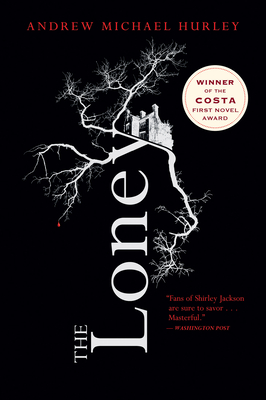 
Not On Our Shelves—Ships in 1-5 Days
Hailed as “a masterful excursion into terror” by the Sunday Times—the eerie, suspenseful debut novel from the author of Devil’s Day and Starve Acre.

Winner of the Costa First Novel Award
A Best Book of the Year, London Times and Daily Mail

“The terrors of this novel feel timeless . . . There are abominations here, and miracles.”—New York Times Book Review

“An amazing piece of fiction.”—Stephen King

When Smith was a boy, he and his family went on an Easter pilgrimage with their local parish to the Loney, a bleak stretch of the English coastline, to visit an ancient shrine in search of healing for Smith’s disabled brother. But the locals were none too pleased to welcome them, and the two brothers soon became entangled in a troubling morass of dangerous rituals.

For years after, Smith carries the burden of what happened that spring. And when he hears that the body of a young child has been found during a storm at the Loney, he’s forced to finally reckon with his darkest secrets—and the terror they carry with them.
“The masterpiece by which Hurley will enter the Guild of the Gothic”—Guardian

“Fans of Shirley Jackson are sure to savor . . . Tight, suspenseful writing makes this masterful novel unsettling in the most compelling way.”—Washington Post
ANDREW MICHAEL HURLEY lives in Lancashire, where he teaches English literature and creative writing. He has published two short story collections. His first novel, The Loney, won the Costa First Book Award, was short-listed for the James Herbert Award, and was published in twenty territories.

Winner of the Costa First Novel Award A Sunday Times Exceptional Novel of 2015 A Best Book of 2015 by the Times and the Daily Mail     “It’s not just good, it’s great. An amazing piece of fiction.” —Stephen King   “THE LONEY by Britain’s Andrew Michael Hurley likewise deals with the impact of damaged children on family life. During Easter Week, a deeply Catholic family travels to a distant shrine on the English coast, hoping to find a miracle cure for their mute older son. Miracles, they discover, do exist, but always at a cost. It’s hard to believe that this mysterious, richly atmospheric book is a first novel.”—Washington Post, “Horror novels are having a renaissance. Here’s what to read.”   “A palpable pall of menace hangs over British author Hurley’s thrilling first novel, narrated by a London boy, “Tonto” Smith, whose affectionate nickname was bestowed by a parish priest who likened himself to the Lone Ranger. Tonto and his family undertake an Easter pilgrimage to the Moorings, a house overlooking a treacherous swath of tide-swept Cumbrian coast known as the Loney. Smith’s devoutly Catholic mother hopes that taking the waters at the nearby shrine will cure his older brother, Hanny, of his lifelong muteness. But the Cumbrian landscape seems anything but godly: nature frequently manifests in its rawest state and the secretive locals seem beholden to primitive rites and traditions that mock the religious piety of the visitors. Adding to the mystery is Coldbarrow, a spit of land turned twice daily by the tides into an island, where a man, a woman, and a pregnant teenage girl have taken refuge in a gloomy house named Thessaly. Hurley (Cages and Other Stories) tantalizes the reader by keeping explanations for what is happening just out of reach, and depicting a natural world beyond understanding. His sensitive portrayal of Tonto and Hanny’s relationship and his insights into religious belief and faith give this eerie tale depth and gravity.” —Publishers Weekly, starred review     “When a landslide during a winter storm reveals the body of an infant, the desolate Lancashire coastline known as the Loney is in the news, and the narrator called Smith realizes he must tell the story of his past there. Thirty years earlier Smith’s family and other church members undertook an Easter pilgrimage to an old shrine in order to “heal” his mute brother Hanny and reconvene with God. However, the adventure was one of clashing attitudes, strange locals, loud noises in the night, hidden locked rooms, and miracles that may not have been God’s will at all. First-time novelist Hurley weaves an intricate story of dark mystery and unwavering brotherly love that lends itself to many rereads. The characterizations are superb; even the Loney becomes a distinct character as it seems the place, not the people, is to blame for the bizarre happenings. Also, while religion plays a major role, the reference is more an observation of traditions. VERDICT: This eerily atmospheric and engrossing novel will captivate readers who like their fiction with a touch of the gothic.” —Library Journal, editor’s pick     “The Loney is one of the best novels I’ve read in years. From the very first page, I knew I was in the hands of a master. Atmospheric, psychologically astute, and saturated with the kind of electrifying wrongness that makes for pleasurably sleepless nights.” —Kelly Link, author ofGet in Trouble     “The Loney —