The Mighty Mars Rovers: The Incredible Adventures of Spirit and Opportunity (Scientists in the Field) (Paperback) 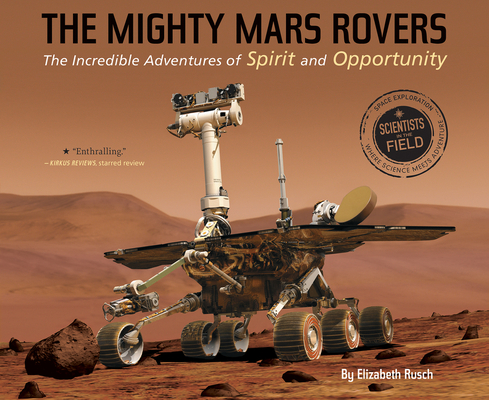 The Mighty Mars Rovers: The Incredible Adventures of Spirit and Opportunity (Scientists in the Field) (Paperback)

The Mighty Mars Rovers tells the greatest space robot adventure of all time—one of the most successful space explorations ever undertaken.

On June 10, 2003, a little rover named Spirit blasted off on a rocket headed for Mars. A month later, a twin rover named Opportunity soared through the solar system with the same mission: to find out if Mars ever had water that could have supported life. They were expected to last no more than three months on the frigid, harsh planet. Instead, they explored the red planet for years.

Packed with full-color photos, this 80-page book is a thrilling addition to the acclaimed Scientists in the Field series, told through the eyes—and heart—of Steven Squyres, the lead scientist on the mission.

This suspenseful page-turner captures the hair-raising human emotions felt during the adventures with two tough rovers.

Elizabeth Rusch lives in Portland, Oregon, with her husband, two terrific kids, and one very funny, quirky dog named Reba. She has written more than 100 magazine articles and more than a dozen acclaimed children’s books, including picture books, middle grade, fiction, nonfiction and even a graphic novel.

-NYPL 100 Titles for Reading & Sharing, 2012   (star) "Enthralling . . . How extraordinary to visit Mars in Spirit; readers will be very glad of the Opportunity."--Kirkus, starred review   (star) "Well documented and fully illustrated with many colorful photos and digital images, this is a book that space technology fans won't want to miss."--Booklist, starred review   (star) "This detailed look at planning, implementing, maintaining, and troubleshooting a highly complex scientific mission puts a human face on an incredible accomplishment."--School Library Journal, starred review   (star) "Rusch's account skillfully captures the exciting quest for knowledge that drives Squyres and his team through the leaps and setbacks of scientific exploration."--Horn Book, starred review —