The Journey That Saved Curious George Young Readers Edition: The True Wartime Escape of Margret and H. A. Rey (Paperback) 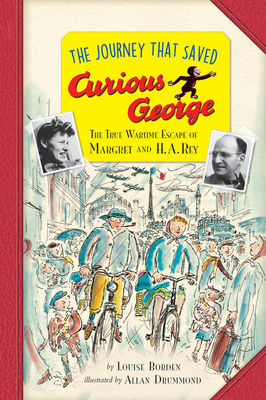 The Journey That Saved Curious George Young Readers Edition: The True Wartime Escape of Margret and H. A. Rey (Paperback)


On Our Shelves Now at:
In 1940, Hans and Margret Rey fled their Paris home as the German army advanced. They began their harrowing journey on bicycles, pedaling to Southern France with children’s book manuscripts among their few possessions.

Follow the Rey’s amazing story in this unique large format book that resembles a travel journal and includes full-color illustrations, original photos, actual ticket stubs and more. A perfect book for Curious George fans of all ages.
Louise Borden is the highly regarded author of many books, including Good Luck, Mrs. K!, Sleds on Boston Common, Good-bye, Charles Lindbergh and The Little Ships: The Heroic Rescue at Dunkirk in WW II, published by Margaret McElderry Books, and The Journey That Saved Curious George, Across the Blue Pacific, and His Name Was Raoul Wallenberg, published by HMH. She lives with her husband, Pete, in Cincinnati, Ohio, and has three grown children. Her website can be found at www.louiseborden.com.

Allan Drummond is the illustrator of many children’s books, including The Journey that Saved Curious George. He studied illustration at the Royal College of Art in London and has lived and worked in France and the USA.

"More than a first biography of picture book icons, this is a fine introduction to the period for young children, a model of documentation, and an exceptionally inviting and well-designed book." --Horn Book Horn Book —