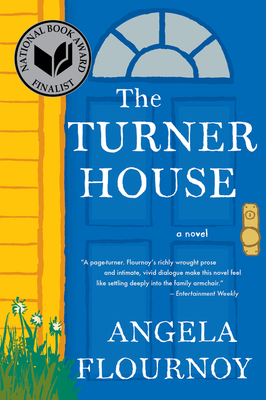 “The greatest testament to the skill of a writer is the ability to make what might seem alien to the reader completely recognizable and utterly engaging. Such was my experience reading The Turner House. Mine is a tiny white family from a small town with no sense of heritage, yet every moment I spent with the Turners -- a family of 13 children shaped by the Great Migration to Detroit -- I felt at home. Their struggles and joys are universal, yet told with an exacting eye that always finds the perfect detail. This is a truly impressive debut.”
— Kim Fox (M), Schuler Books & Music, Grand Rapids, MI

“Flournoy’s knockout debut is one of those books that should, by rights, be described as the Great American Novel.” — NPR
A New York Times Notable Book

For over fifty years the Turners have lived on Yarrow Street. Their house has seen thirteen children get grown and gone—and some return; it has seen the arrival of grandchildren, the fall of Detroit’s East Side, and the loss of a father. But when their powerful mother falls ill, the Turners are called home to decide their house’s fate and to reckon with how their past haunts—and shapes—their future. The Turner House is a striking examination of the price we pay for our dreams, and the ways in which our families bring us home.

“In this assured and memorable novel, [Flournoy] provides the feeling of knowing a family from the inside out, as we would wish to know our own.” — New York Times Book Review

ANGELA FLOURNOY is a graduate of the Iowa Writers' Workshop and the University of Southern California. Her fiction has appeared in the Paris Review, and she has written for the New Republic, the Los Angeles Review of Books, and other publications. She has taught writing at the University of Iowa and Trinity Washington University. She was raised by a mother from Los Angeles and a father from Detroit.