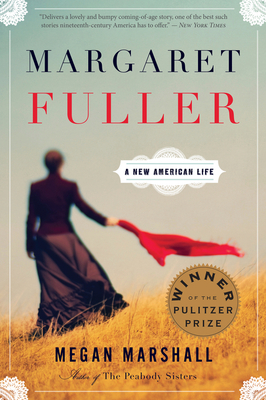 Winner of the Pulitzer Prize for Biography

Whether detailing her front-page New-York Tribune editorials against poor conditions in the city’s prisons and mental hospitals, or illuminating her late-in-life hunger for passionate experience—including a secret affair with a young officer in the Roman Guard—Marshall’s biography gives the most thorough and compassionate view of an extraordinary woman. No biography of Fuller has made her ideas so alive or her life so moving.

“Megan Marshall’s brilliant Margaret Fuller brings us as close as we are ever likely to get to this astonishing creature. She rushes out at us from her nineteenth century, always several steps ahead, inspiring, heartbreaking, magnificent.” — Rebecca Newberger Goldstein, author of Betraying Spinoza: The Renegade Jew Who Gave Us Modernity

"Shaping her narrative like a novel, Marshall brings the reader as close as possible to Fuller’s inner life and conveys the inspirational power she has achieved for several generations of women." — New Republic

MEGAN MARSHALL is the winner of the 2014 Pulitzer Prize in Biography for Margaret Fuller, and the author of The Peabody Sisters, which won the Francis Parkman Prize, the Mark Lynton History Prize, and was a finalist for the Pulitzer Prize in 2006. She is the Charles Wesley Emerson College Professor and teaches narrative nonfiction and the art of archival research in the MFA program at Emerson College. For more, visit www.meganmarshallauthor.com.

2014 Pulitzer Prize citation forMargaret Fuller: A New American Life, by Megan Marshall  "Megan Marshall’s richly researched and elegantly presented biography of Margaret Fuller reads like a novel – but with a twist. Marshall takes her cue from Hawthorne, who called his books “romances” rather than novels, in order (as he put it) to “bring out or mellow the lights and deepen and enrich the shadows of the picture” while maintaining allegiance to the “truth of the human heart.” The result is thrilling. Marshall’s keen observations and rigorous analysis are expressed in fresh, creative ways that honor her subject’s own imaginative boldness in life and art.   Marshall is keenly aware that there was little distinction between public and private in Margaret Fuller’s life. She shows how Fuller, in fact, aimed to break down such a distinction, which she felt hemmed in the lives of women. Marshall, exhilaratingly, writes Fuller’s story “from the inside out, using the most direct evidence – her words and those of her family and friends, recorded in the moment.” She provides deft and vividly sympathetic reconstructions, bolstered by newly discovered documents, of the interesting times and locales – in Cambridge, New York, and Italy—in which Fuller lived. . . .  Like all great historical works, Margaret Fuller informs us about the past as it forces us to think about our present. Fuller, who helped spark the nineteenth-century movement for women’s rights, opened a path that we still follow. Megan Marshall’s beautiful rendition of her life inspiringly links past to present, and is a classic of modern biography."   "Megan Marshall's brilliant Margaret Fuller brings us as close as we are ever likely to get to this astonishing creature. She rushes out at us from her nineteenth century, always several steps ahead, inspiring, heartbreaking, magnificent." — Rebecca Newberger Goldstein, author of Betraying Spinoza: The Renegade Jew Who Gave Us Modernity   "Megan Marshall gives new meaning to close reading—from words on a page she conjures a fantastically rich inner life, a meld of body, mind, and soul. Drawing on the letters and diaries of Margaret Fuller and her circle, she has brought us a brave, visionary, sensual, tough-minded intellectual, a ‘first woman’ who was unique yet stood for all women. A masterful achievement by a great American writer and scholar.” — Evan Thomas, author of Ike’s Bluff: President Eisenhower’s Secret Battle to Save the World   "Megan Marshall’s Margaret Fuller: A New American Life is the best single volume ever written on Fuller. Carefully researched and beautifully composed, the book brings Fuller back to life in all her intellectual vivacity and emotional intensity. Marshall’s Fuller overwhelms the reader, just as Fuller herself overwhelmed everyone she met. A masterpiece of empathetic biography, this is the book Fuller herself would have wanted. You will not be able to put it down." — Robert D. Richardson, author of Emerson: The Mind on Fire  "Fuller’s was a great life, flush with drama, and Megan Marshall’s new biography rises to it in ways small and large . . . This one pitches Ms. Marshall into the front rank of American biographers . . . 'Margaret Fuller' is as seductive as it is impressive . . . In Ms. Marshall, Fuller has found what feels like her ideal biographer." -- New York Times "A lively, intuitive study of a remarkable American character.”  — Kirkus Reviews  "The book's success comes from the way that Marshall allows the read —