Kill Or Capture: The War on Terror and the Soul of the Obama Presidency (Paperback) 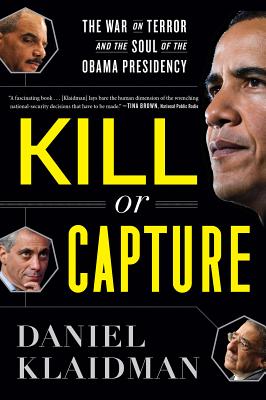 Kill Or Capture: The War on Terror and the Soul of the Obama Presidency (Paperback)


In Stock—Click for Locations
“[An] important book.” — Steve Coll, The New Yorker “Klaidman . . . [was] clearly given extraordinary access to key players in the administration . . . Provide[s] scintillating details.” — Washington Post

How has President Obama waged the war on terror? As lawyer-in-chief, he promised to close the Guantánamo Bay detention camp and engaged his inner circle in wrenching debates over the price of liberty and security. As commander-in-chief, he has become a decisive and lethal warrior, dealing out drone strikes and death sentences to suspected terrorists around the world. Daniel Klaidman reveals Obama’s struggle to balance high-minded idealism and hard-headed politics as it plays out behind closed doors from the Oval Office and the Justice Department to the Situation Room and the CIA. Based on hundreds of interviews with men and women throughout the White House and the national security establishment, Kill or Capture is a startling new portrait of our forty-fourth president.

“A fascinating book . . . Lays bare the human dimension of the wrenching national security decisions that have to be made.” — Tina Brown, NPR

Daniel Klaidman is a special correspondent for Newsweek, where he has worked since 1996, serving as investigative reporter, Middle East correspondent, Washington bureau chief, and managing editor. After 9/11 he led Newsweek's award-winning coverage of the attacks and their aftermath. He is the author of numerous cover stories on terrorism and national security.

"A good book to read if you want an answer to the question, 'What happened?' That is, what happened to the idealistic Obama of the 2008 campaign who was going to shut down GuantÃ¡namo, end indefinite detention, try terrorist suspects in civilian courts, take civil liberties more seriously, and end the rabid secrecy of the Bush era? How did he turn into the guy who not only didn't do any of that stuff, but became a drone-obsessed killing machine in the process?"
—Kevin Drum, Mother Jones


"Divulge(s) the details of top-level deliberations—details that were almost certainly known only to the administration's inner circle. Likely to be the most thorough accounts of America's recent national-security efforts that we shall receive before the November election."
—The Wall Street Journal
—